So lately my kids have been fighting like cats and dogs. Some days Zoey’s all hormonal and keeps being mean to Holden. Some days Holden is being the quintessential little brother who wants to annoy his sister until she FREAKS out. Sometimes it’s just verbal fights and I’m like, “Aggghhh, knock it off!!” And sometimes one of them lays a hand on the other and I automatically take away screen time. You hit, you lose. No warnings.

It’s this vicious cycle they get stuck in and can’t get out.

Anyways, a couple of weeks ago, I don’t know if there was a full moon or something, but they were being particularly douchenuggety and Zoey was feeling sad about it. I mean when they’re not fighting, they’re best friends. So when they are fighting, it’s like she’s lost her BFF.

And when I came downstairs one morning, I found some artwork from Zoey on the kitchen counter. Now usually when I find crappy artwork I wait until no one’s looking and shove it into the trashcan and carefully put trash on top of it so no one notices, but this one was different. And I left it right there on the counter on purpose, hoping that maybe Holden would see it. 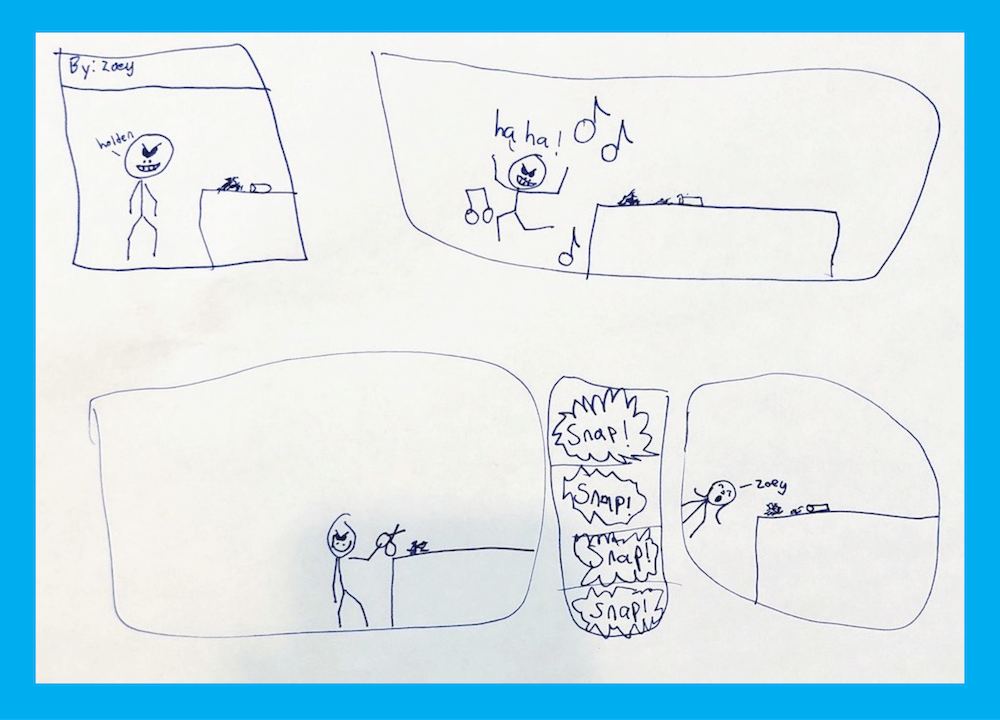 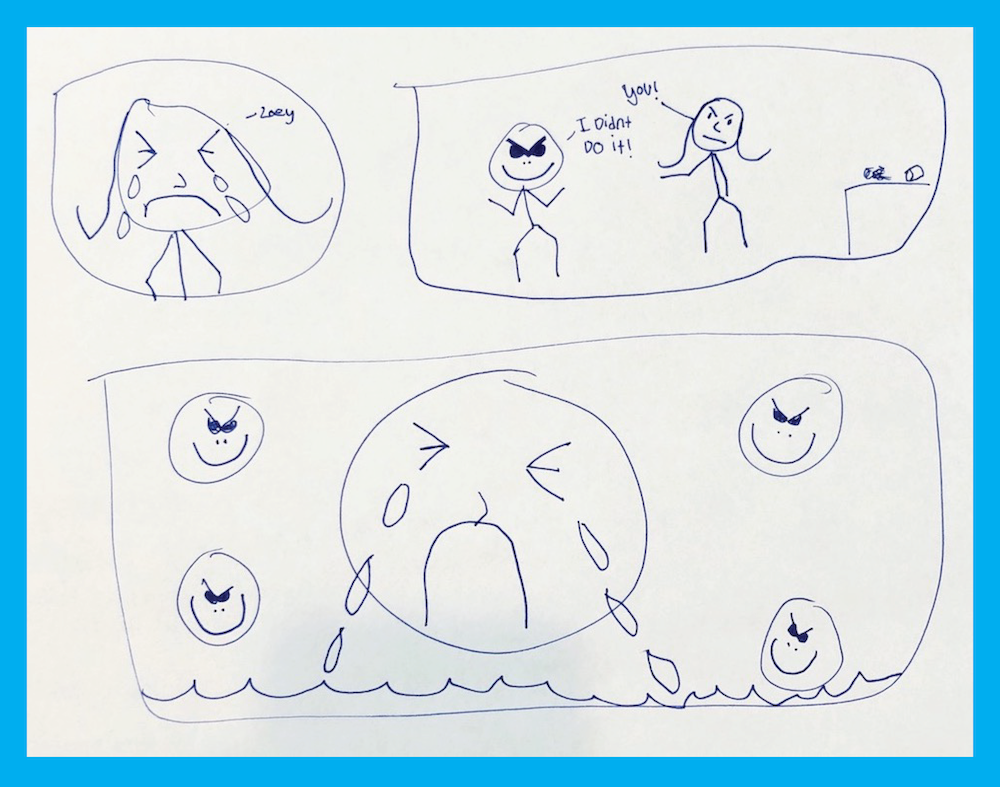 Evil Holden turns into sad Holden because he feels bad 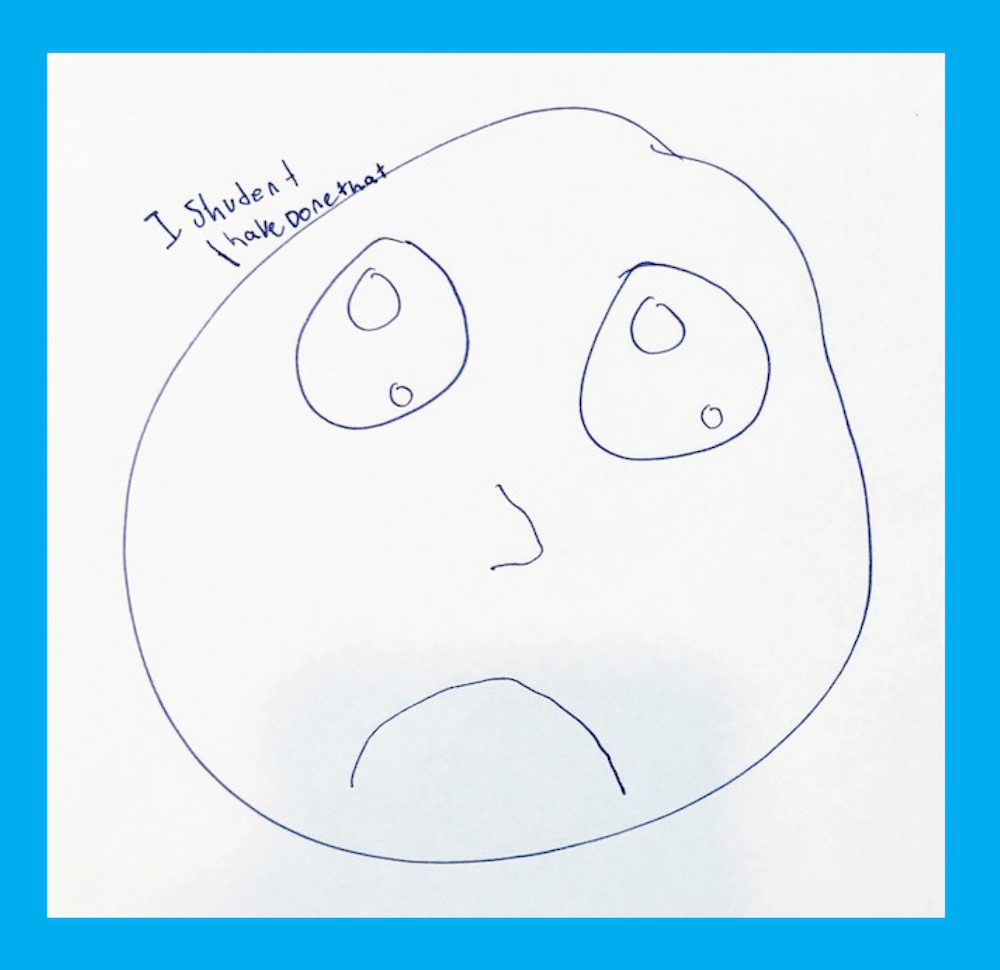 I don’t know if Holden even noticed the cartoon on the counter. I mean I left it there for MANY days, so hopefully he did, but a spatula can be lying on the floor in the middle of our hallway for weeks and no one will notice it besides me. But maybe he saw it because guess what happened? A day or two later he wrote her this… 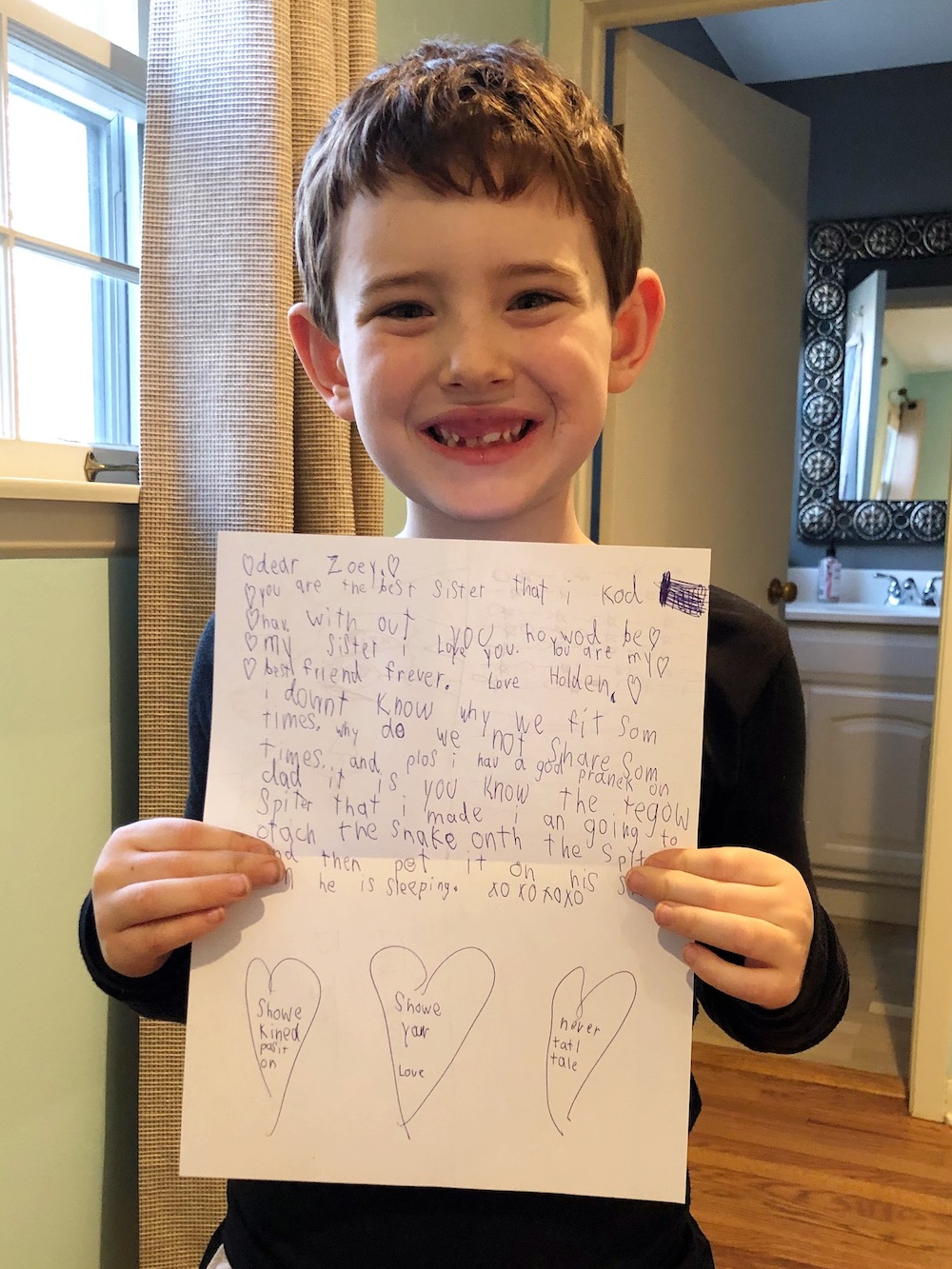 Dear Zoey, you are the best sister that I could have. Without you who would be my sister. I love you. You are my best friend forever. Love Holden. I don’t know why we fight sometimes. Why do we not share sometimes? And plus I have a good prank on Dad. It is you know the LEGO spider that I made. I am going to attach the snake on the spider and then put it on his stomach when he is sleeping. xoxoxoxo

Awwwwwwww. My heart!!!! I literally framed the note right that second and Zoey hung it up on her wall immediately. 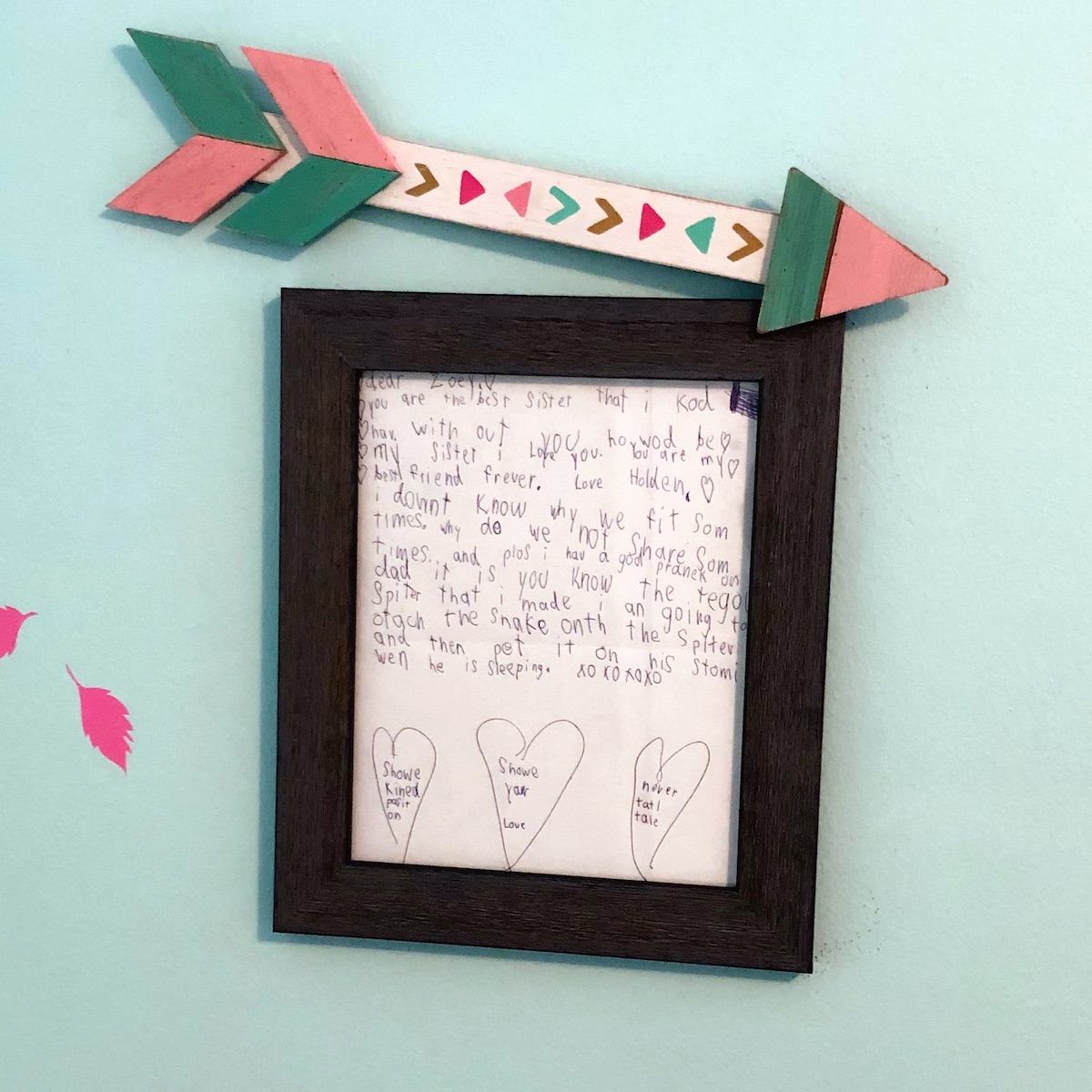 But wait, if you’re not tearing up yet, there’s more. The next night I was telling the kids to get ready for bed for the 2000th time, when I heard one of them in the kitchen rummaging through the pantry and I could literally hear the box of Girl Scout cookies being opened (I’d know that sound anywhere).

Well, let’s just say I spontaneously turned into the Tasmanian Devil and I was about to go Cujo on someone’s butt. I stormed into the kitchen and Zoey quickly hid something behind her back.

And she pulled two cookies out from behind her back.

ME: Zoey Lila Alpert, seriously?!! Cookies?! You already had dessert and it is TIME FOR BED.

ZOEY: Noooo, Mom, they’re not for me.

And she showed me what she was holding in her other hand. A baggie and a note. 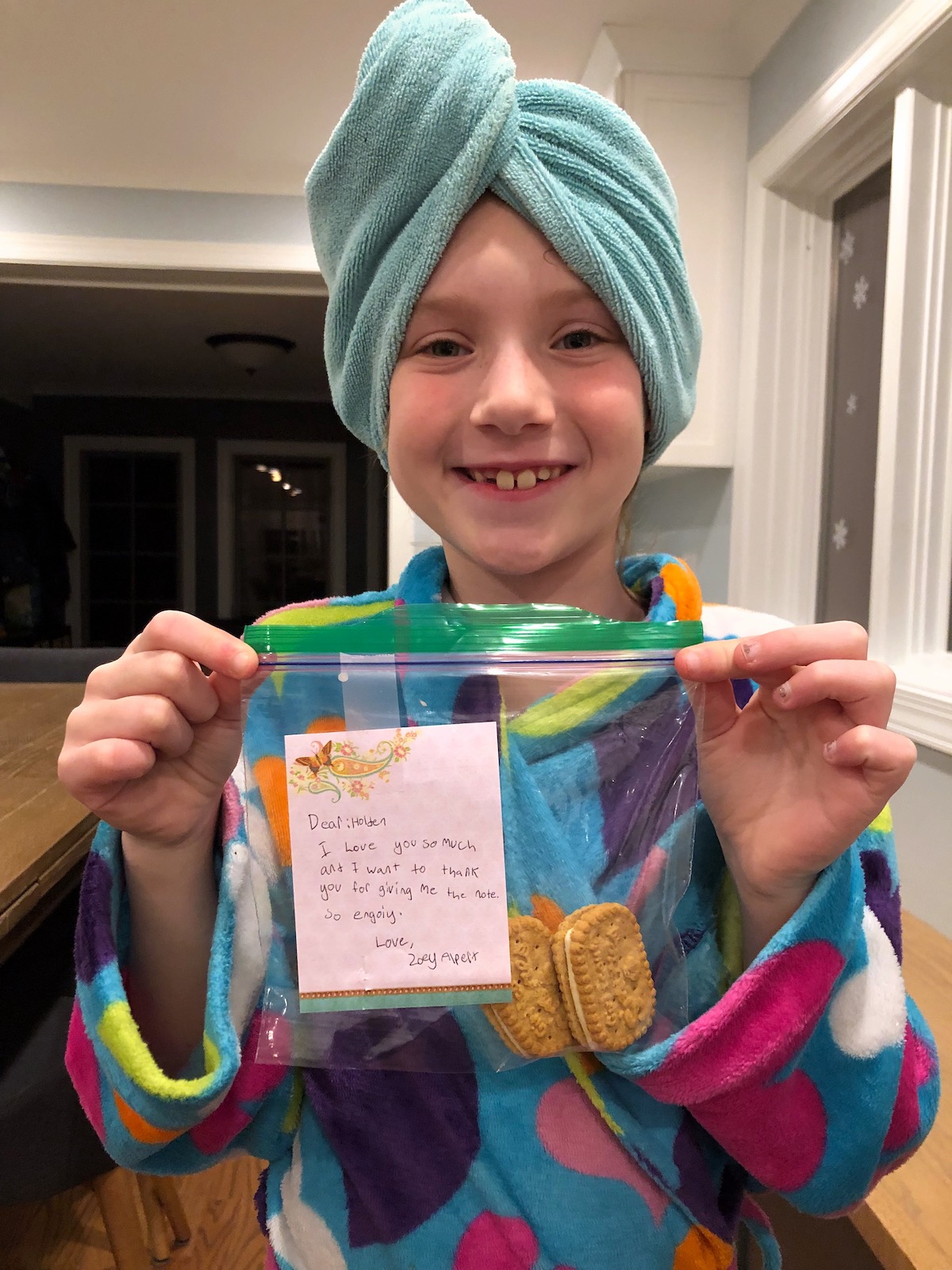 Dear Holden, I love you so much and want to thank you for giving me the note. So enjoy. Love, Zoey Alpert

ZOEY: I was going to put it in his lunchbox as a surprise.

But wait, there’s even MORE. She put it in his lunchbox and he was so excited when he found it that he proudly showed the whole lunch table. Well his friend James saw it and was inspired. That night James came home and wrote a note to his own sister and stealthily put it in her lunchbox with a bag of cookies. Wha-WHAT?!!! The sibling kindness is spreading!! I’m telling you, show your kids this story. Maybe they’ll be inspired too. And maybe it’ll stop them from fighting with their siblings… for a few minutes at least.

I wish I could frame the note Zoey wrote to Holden and hang it in his room like I did hers, but since he ate the cookies and threw it out, I’ll just have to print out the picture of Zoey and hang it up.

And the next time Zoey tears Holden’s head off, or Holden won’t stop humming even after Zoey is screaming at him to STOPPPPPPP, or the next time Zoey’s feeling sad because her best friend isn’t acting like a best friend, I’m going to point to these framed pictures and remind them what they mean to each other.

And even if they don’t want to look at them, I will. To remind myself that even when they fight like cats and dogs and drive me bonkers, deep down they really are best friends who REALLY do love each other.


There are 5 comments for this article