ME: Zoey, what kind of birthday party do you want this year?

ZOEY: I want a birthday party that no one else has had.

ME: Ummm, okayyyyy, like maybe an undernighter for just a few of your closest friends?

ZOEY: No, Elsa did that.

ME: How about a bounce house party?

ZOEY: No, Belle did that.

ME: How about a princess party?

ZOEY: No, Ariel did that.

In case you’re wondering, yes, these names are all made up. She doesn’t really go to school with the whole Disney cast.

ZOEY: I want a science party!

ME: A science party? Where did you hear of that?

ME: Alrighty then. I’ll look into that.

Seriously? SERIOUSLY?!! That sounds messy and hard to pull off. I mean last year she had a gymnastics party and it was sooooo easy. We went to a gym, did gymnastics, ate cake, and it was done. The year before it was a bounce house place. We went there, bounced, ate some cake, threw up, and it was done. But a science party? Do science labs host parties because there ain’t no way I’m having a volcano explode in my house. So I researched the hell out of science parties. Translation: I went on Facebook and did a shout out to see if anyone knew anything about science parties.

Side note, can we just talk for a minute about the crap moms shout out on Facebook? HIGH-larious. Like the other day Holden was taking forever to poop and he wanted me to stay in there with him so I was surfing Facebook and this mom on there shouted out, “Hey, I have a large bag of unused ketchup packets. Up for grabs if you want to come pick them up!!” I was so tempted to type I totally know a guy who’ll swing by your house to pick them up. The trash guy. But I digress.

Anyways, I did a little shout out…

My daughter wants to have a science birthday party. Does anyone know a place that does this?

…and of course no one answered for like an hour so I felt totally ignored and rejected, but then finally someone wrote an answer.

You should have a Mad Science birthday party.

Wow, that sounds cool. What the heck is that? So I looked it up and after a little research (verrrry little because I’m lazy), I booked it. I mean anything is better than the science party I would throw. Basically I’d take the kiddos into our backyard and drop some mentos into a diet coke bottle.

WHAT: A science party in Zoey’s backyard!!

So I booked the Mad Science one instead. And for the next five weeks I had to listen to this.

And then the day came. I don’t know what I was expecting. I guess I kinda pictured a crazy Albert Einsteiny dude in a white lab coat doing chemistry experiments for the kiddos with things exploding and stuff. Not. At. All.

This awesome lady named Kelly showed up and put on the most kickass party ever. The kids were sooooo interested and sat there mesmerized while she did all these awesome sciencey thingies with them. 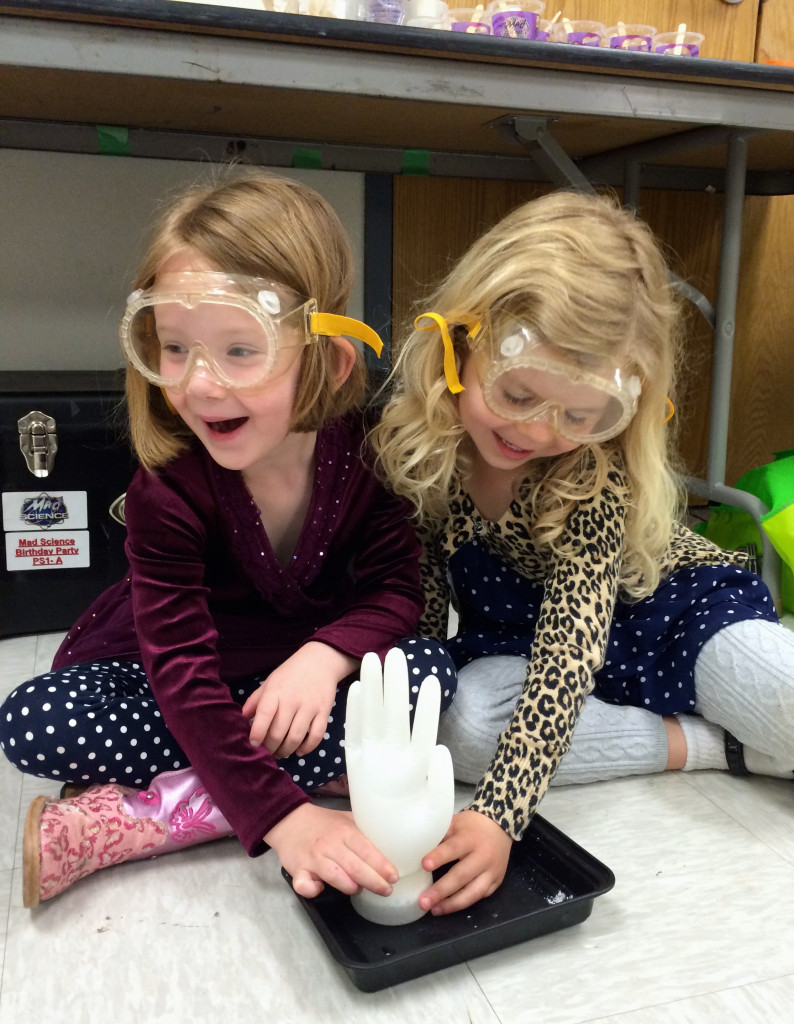 Did you know alka seltzer can make a rubber glove puff up? 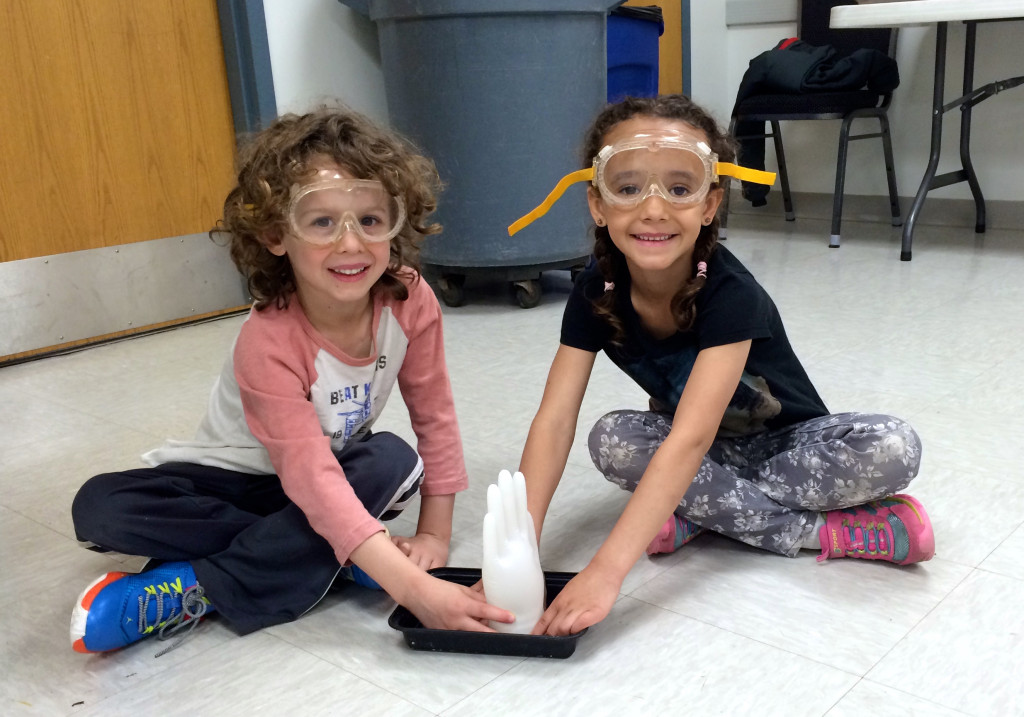 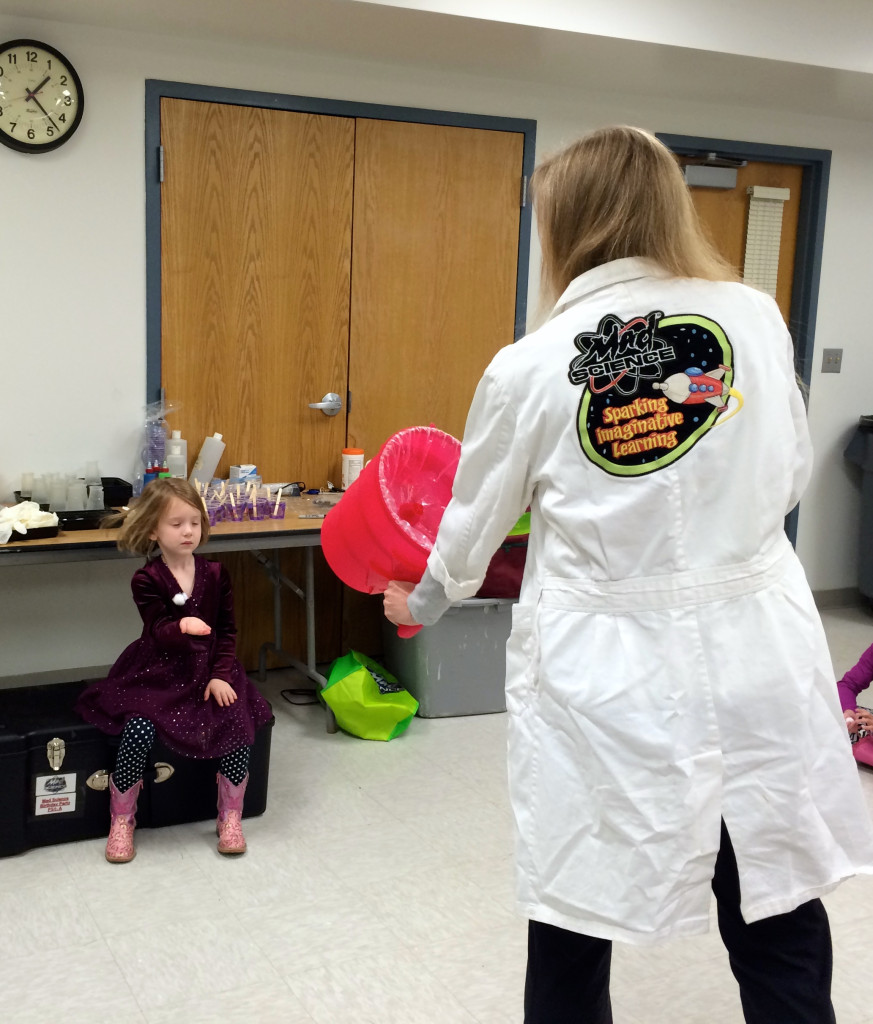 And she used this cool air puffer thing to show the kids how air can make a cotton ball move. 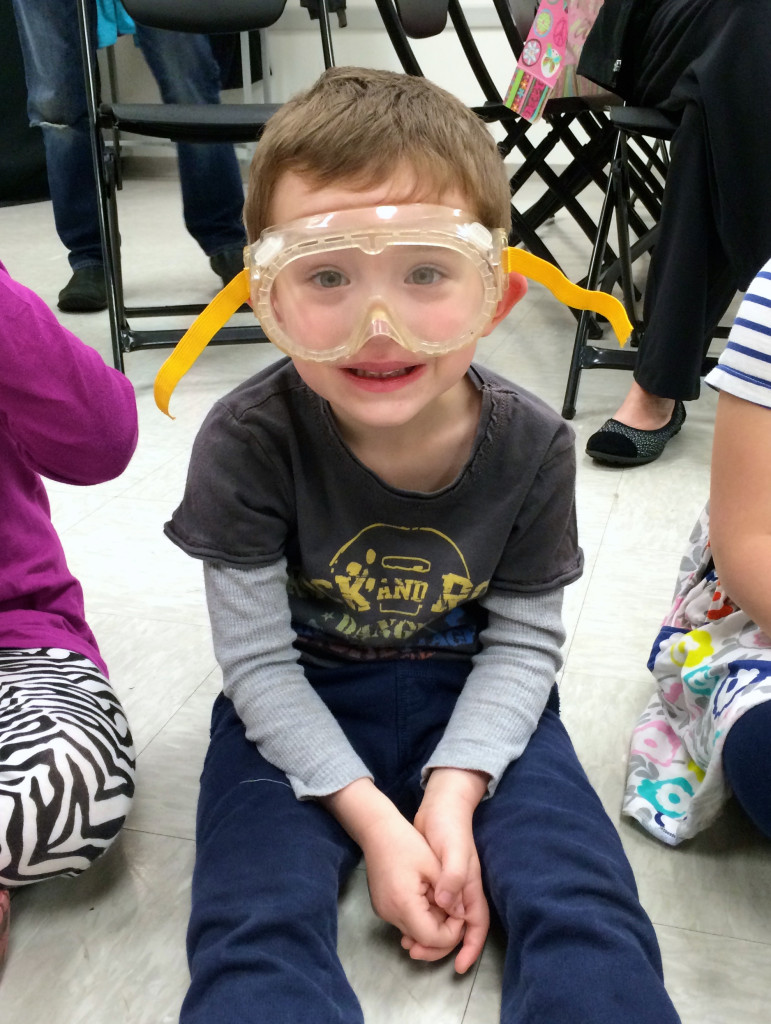 And the kids got to wear these really cute goggles for pictures! 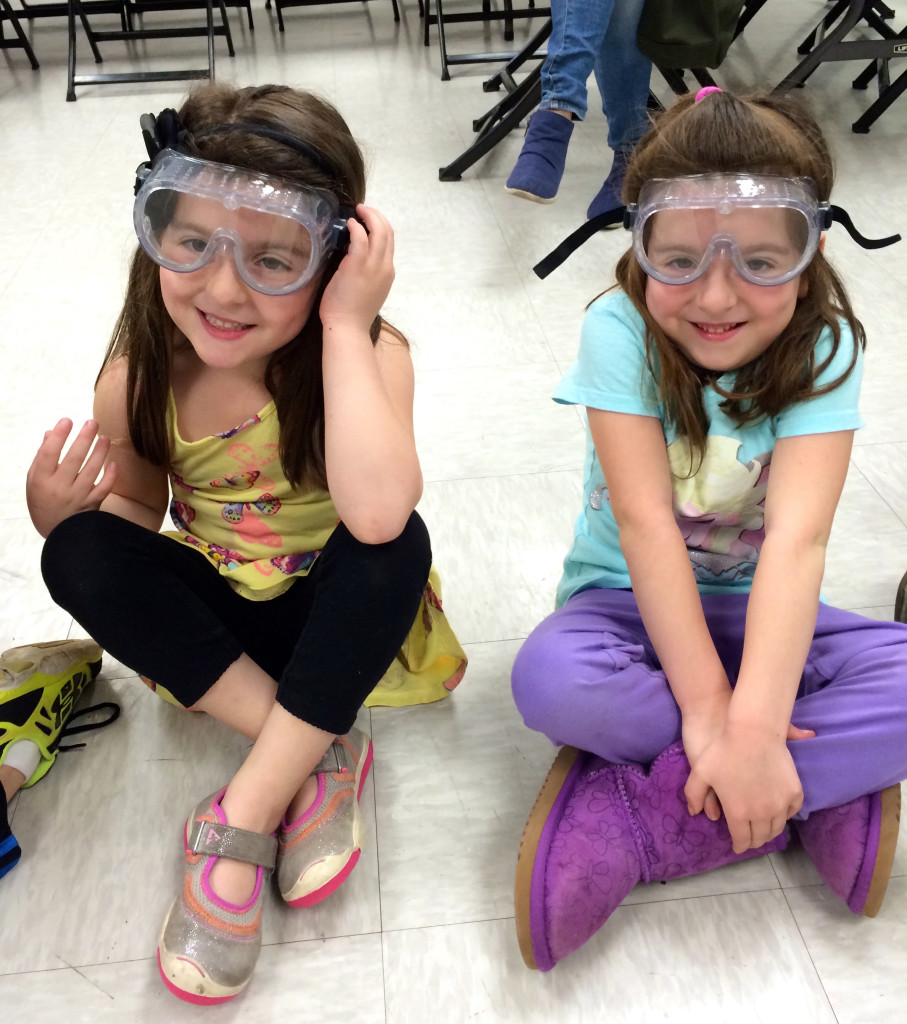 Well, they were probably to protect their eyes, but I thought they were super cute for pictures. 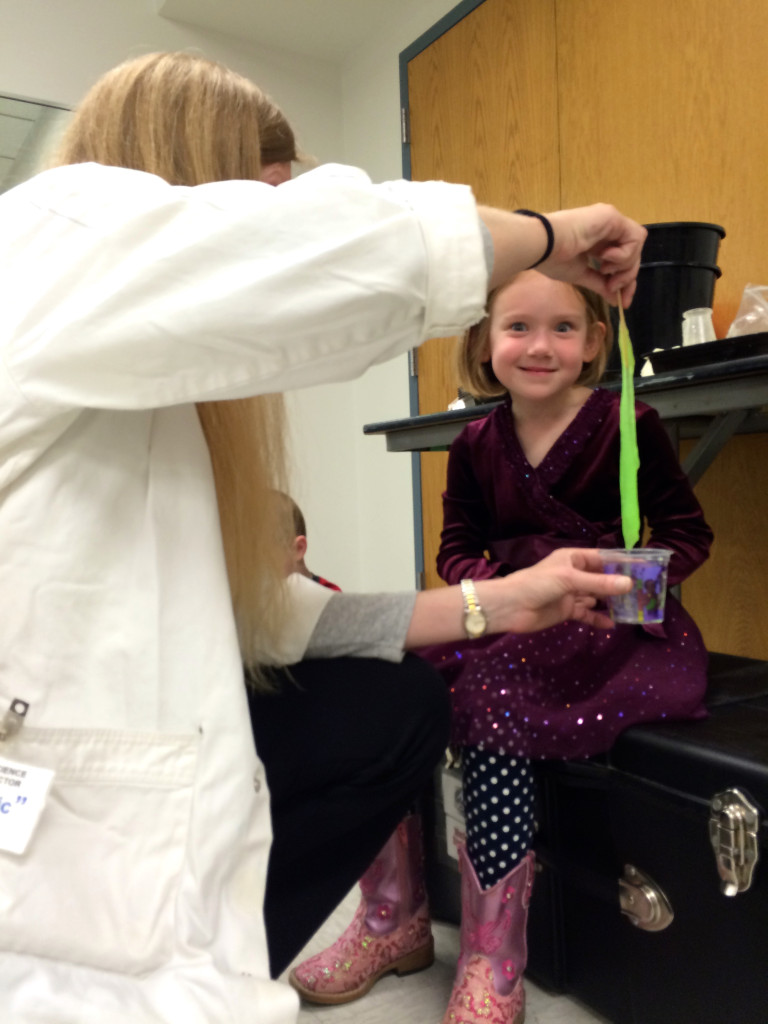 They got to choose whether they wanted to make purple slime or green slime and Zoey picked green which shocked the hell out of me, but afterwards I asked her why she picked green and she said, duhh, that’s the color of slime. 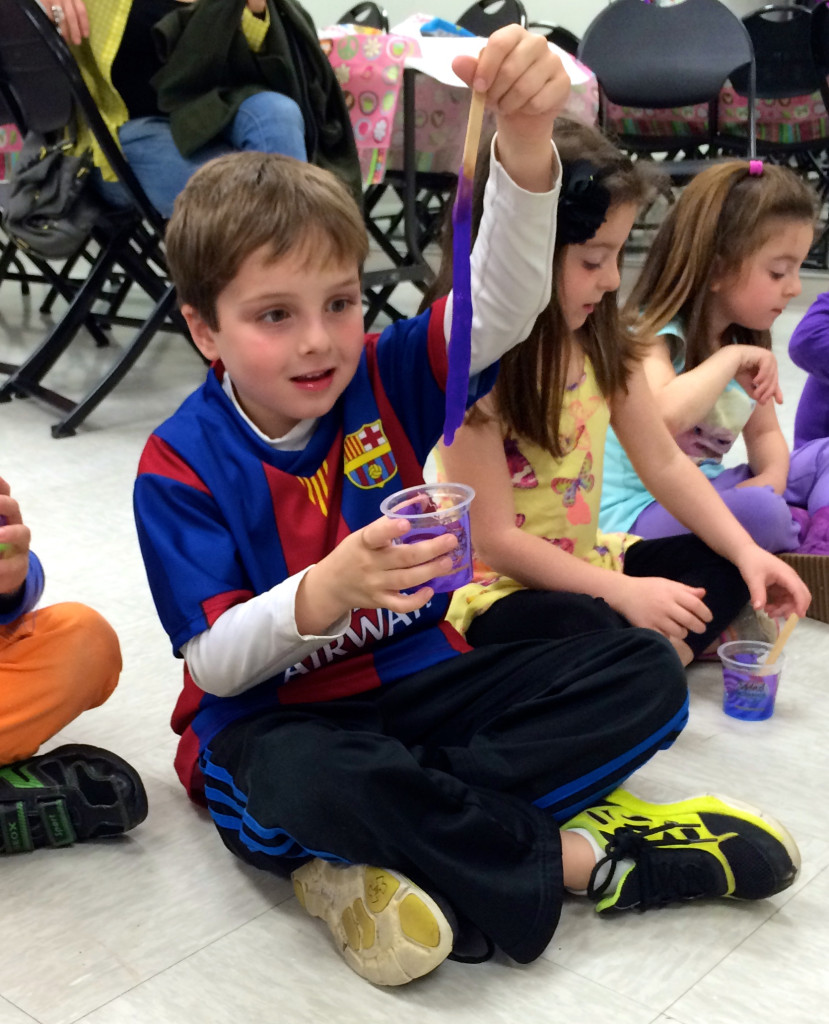 They even got to take the slime home!! Wahooo, free party favors! Of course, I told the parents to throw it out when their kids weren’t looking. 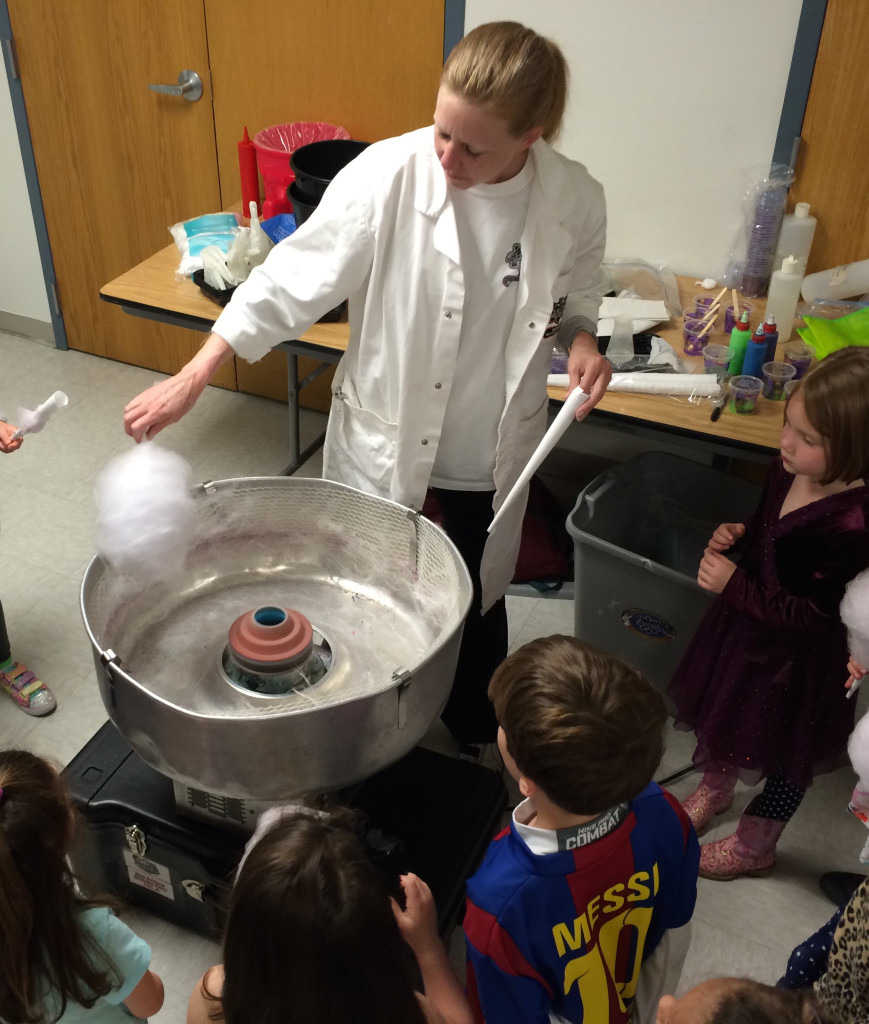 Kelly the awesome science lady even made cotton candy and explained the science behind it. I didn’t listen. I was too busy salivating. 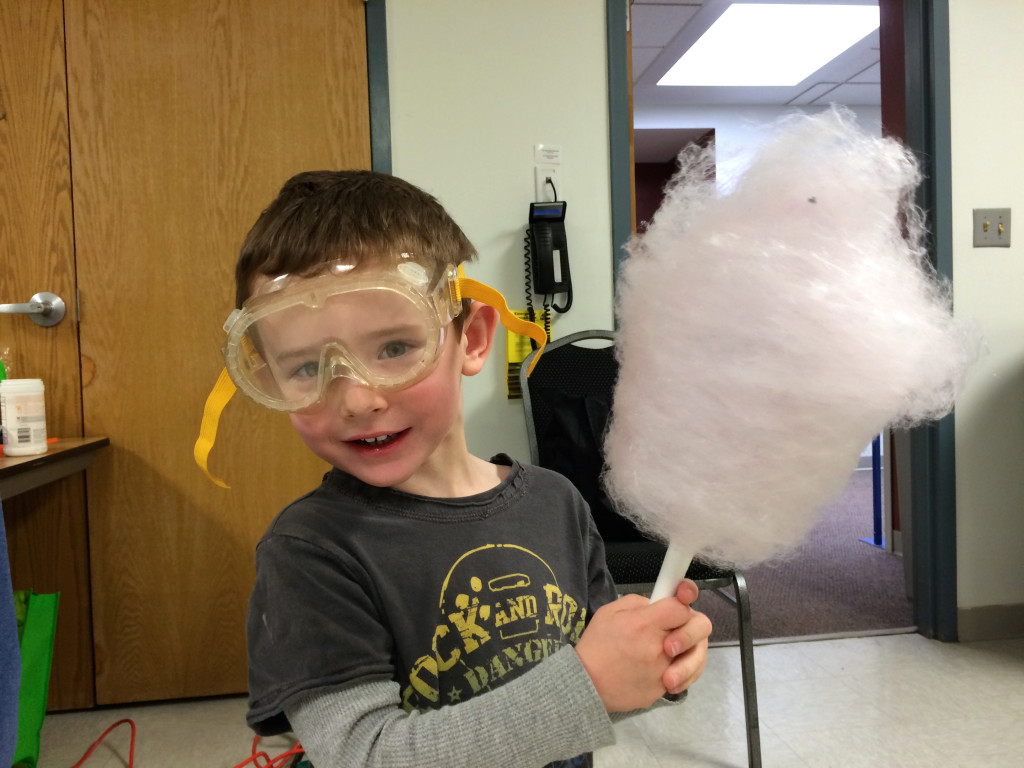 You know it’s a good birthday party when the cotton candy is bigger than your head. 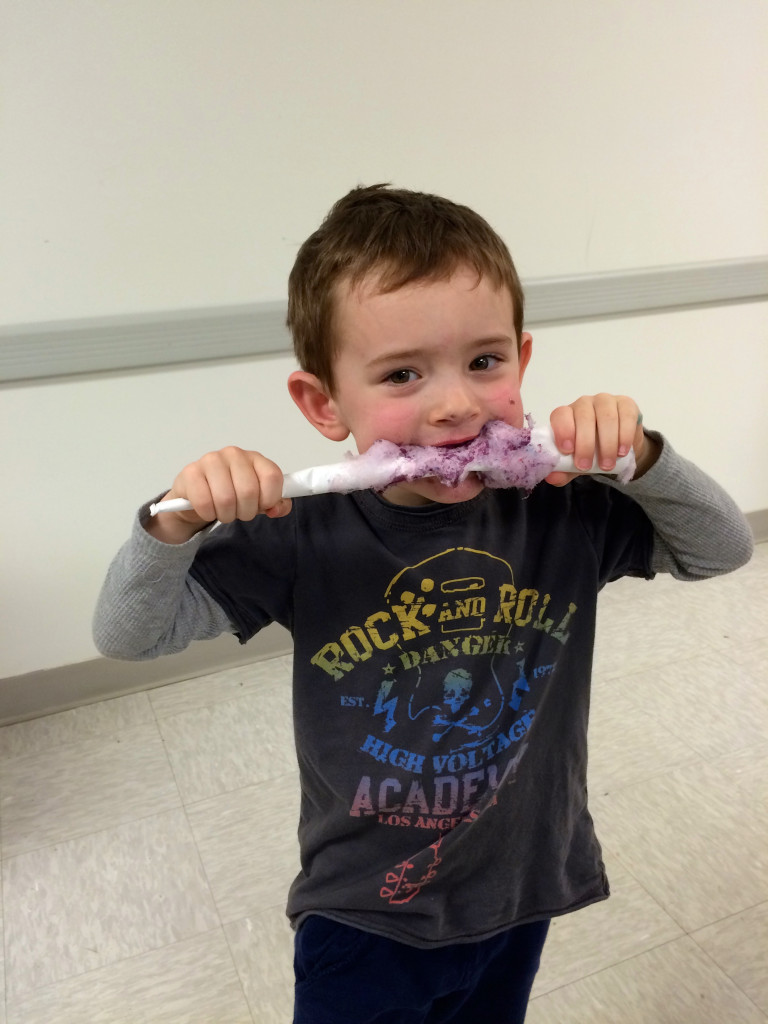 And it makes the most awesome treat because Mommy can tell where not to bite because it’s darker. No thanks, buddy, you keep it. 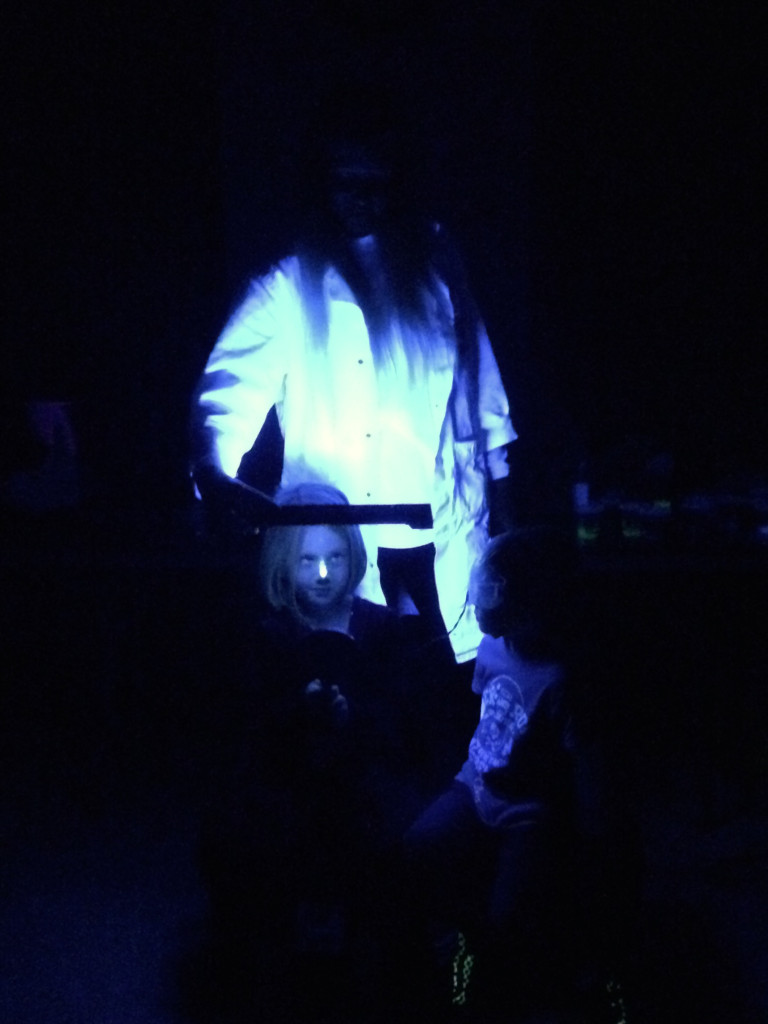 And did you know that if it’s your birthday, your nose glows green in the dark?!! 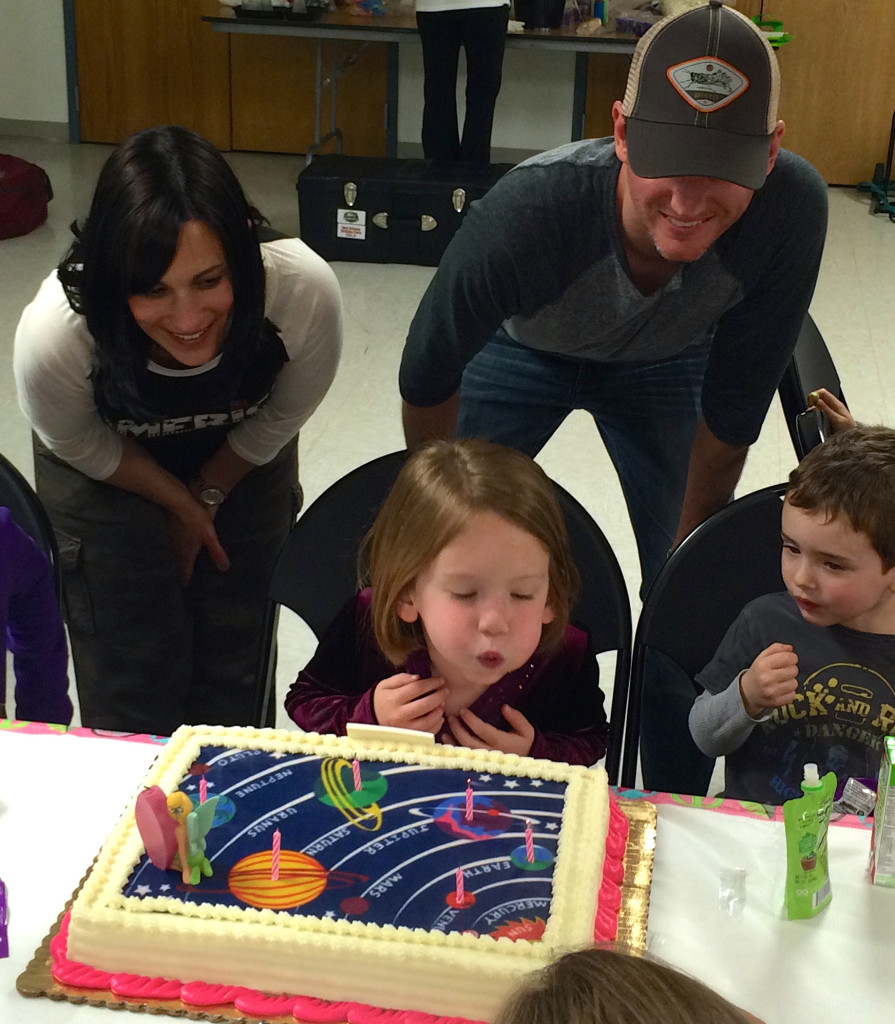 Anyways, it was an AWESOME party and in case you can’t tell, I would HIGHLY recommend a birthday party from my new friends at a Mad Science. They rock.

If you liked this post, please don’t forget to subscribe to this page below so you don’t miss anything funny! Thank you!!