Do you have these cups? Everyone I know has these cups. They’re from IKEA which means they’re super cheap and awesome. Except for one thing. I can’t help from paying attention to which color I’m giving to the kids. I know, I know, I’m not supposed to teach them that color matters, and I’m just supposed to grab the two cups from the top of the pile and put them on the table without thinking about it. But I don’t.

Because do you know what happens when I put the pink cup down in front of my son? A shitstorm of monumental proportions. And I can try to reason with him and tell him color doesn’t matter, but by this point he’s wailing and past the point of no return and he’d rather die of thirst. So for the past year or so, if there’s a pink cup or a purple one on top of the pile, I’ve been intentionally pulling a different one from the middle. But I think I’m going to stop. And here’s why.

So the other day we were in the car and Holden said something.

HOLDEN: I know someone who’s black.

Just to clarify, I don’t remember what exactly we were talking about but this wasn’t totally random and it was in context of our conversation.

But it was interesting because clearly Holden noticed that there was something different about the coloring of Benji. And we ended up having a little conversation about skin color and what it means and what it doesn’t mean.

Some people say kids don’t notice skin color and that it’s taught, but I’m calling bullshit on that. Kids notice color, and not just in cups. Like once when Zoey was little she asked the man behind the deli counter if he was made of chocolate. Needless to say, I was mortified. I mean I don’t think kids look at someone of a different color and think the person is bad or anything, but I do think they notice sometimes.

And we can keep our mouths shut and not talk about it because it’s kind of an uncomfortable subject and we don’t want to say the wrong thing, or we can be open about it and help our kids understand why diversity is a beautiful thing that we should cherish. Not ignore.

So this is what I’m starting to tell my kids. That it’s totally okay to notice someone’s race, but what’s not okay is to judge them for it. Because it’s what’s on the inside that counts the most. Thoughts, dreams, love, hate, beliefs, personality, kindness, humor and an endless number of other things that make us who we are. You can notice someone’s outside, but you can’t really know them until you get to know their inside.

So I know what you might be thinking right now. WTF does this have to do with stupid IKEA cups? Just because he doesn’t want the pink cup doesn’t make him a racist. Well, a cup racist maybe. But the way I see it, by purposely giving my son the green or the blue cup every time, I’ve been missing out on a great life lesson. So here’s what I’m going to do.

This week I’m going to put two cups in front of him. A pink one with apple juice, and a blue one with asparagus juice (or something else equally disgusting). And then I’m going to let him choose. If he makes his decision based on the outside, he’s going to get a rude awakening. But if he is smart and examines what’s on the inside, he’s going to be much happier with his choice. See buddy, it’s what’s on the inside that counts. (Update: It’s a year later and I FINALLY did this. Here it is!!)

By the way, I did try it with Holden too but I’m not showing it because he burst out crying and freaked out when I tried to make him drink out of a pink cup. You win some, you lose some. One day he’ll know it doesn’t matter what color cup you drink your wine out of.

And if you’re looking for something to do besides play cup experiments on your kids, check out my book I Want My Epidural Back! You’ll be laughing ’til you pee yourself. Send me the dry cleaning bill! I won’t pay it, but it’ll make me feel good. 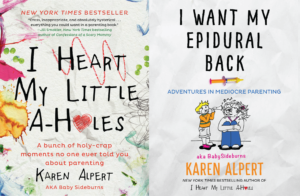