Okay, I have a confession to make and I’ve been feeling shitty about it all week. So last weekend was Zoey’s birthday party and she picked out a super cute pink sparkly leotard to wear for it. And then she picked out a super cute black one with neon designs for Holden to wear. Yup, she dressed our little boy up in a leotard and he came down those stairs ready to go as proud as I’ve ever seen him.

ME: Oooooh, want to wear Spiderman?

ME: Or dinosaurs, rawr.

HOLDEN: I want to wear this!

ME: You can’t wear that to the birthday party Holden. Pick one of these. Look, there’s an elephant on this one!

And eventually he caved and peeled off the leotard that he loved so much and reluctantly put on the dinosaur shirt instead.

I mean I couldn’t give a rat’s ass if he wears a leotard all over the house, but for some reason I just didn’t want him to wear one to Zoey’s birthday party in front of allllll our friends and family. Which is a total dick move because I always say my kids can wear whatever they want as long as it’s seasonally appropriate. But apparently I lied. Apparently he can wear whatever he wants as long as it’s not girl clothing. I suck. I’m sorry I made you take off your leotard, buddy. Next time I’ll try to be better.

So the weird thing about this is that I wrote it yesterday, and then today my sister randomly sent me this video. It made me feel like even more of a jerkwad for convincing Holden to take off the leotard. Go ahead and watch it, I’ll wait for you.

All sorts of things went through my head when I saw it. I felt bad for the family. I admired them. I felt terrible for the boy. I applauded him. But most of all I got more and more angry with myself for making Holden change his outfit last weekend. I mean so what if he wants to dress like a girl sometimes, or even all the time. The most important thing to me in the whole entire world is that my kids are happy, and I HATE HATE HATE that when I took away that leotard, I took away a little piece of his happiness that day. The last thing I want is for him to feel ashamed or wrong the next time he wants to put on a leotard or a dress or hey, even if he wants to be a girl.

So there. From now on, I’m gonna live what I preach. 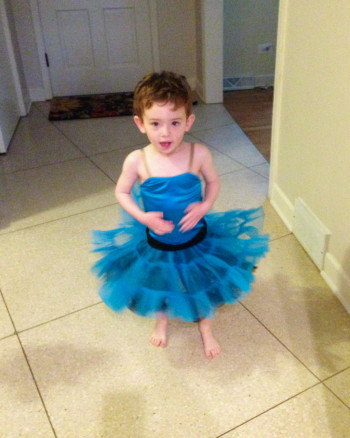