Okay, so lately I’ve learned that if I don’t ask Zoey a million questions after school, like super specific questions, I don’t learn jack shit about what she did that day. Like if I ask her, “How was P.E.?” I get a one-word answer like, “Fine.” But if I ask her “What did you make in art class today?” I get a longer answer like, “Mommm (insert ginormous eye-roll here), we didn’t have art class today.”

The other day she came running off the bus wearing a big veil and I asked, “What’s that?” And she said, “A veil.” Okay, let’s try this again. “Zoey, why are you wearing a veil with the letter “u” on it?” And she gave me a better answer. “Because today we had the wedding of ‘q’ and ‘u’.”

Awww, so cute! I love this idea. The kindergarteners are learning how to spell shit (of course I’m sure my kid already knows how to spell “shit” because I’m constantly spelling my curse words in front of her). Anyways, the wedding was a fun way to teach them that “q” and “u” go together.

ZOEY: Because there were more girls than boys.

Say what???!!!! I mean yeah, I know her class has ten girls and only four boys, but I don’t get this. I mean why not just line the kids up in two lines and marry whoever you’re standing next to?

Hmmm, hold on, thinking about this harder now. Is it because boys are supposed to marry girls? And if we just lined them up then girls would be marrying girls. And what if a boy ended up next to a boy? Then two boys would get married??!! GASP!! I mean girls can’t marry girls and boys can’t marry boys!!!

Wait a second, yes they can. I mean no, not everywhere, but it’s totally legal in this state and the new law says that ANY two people can fall in love and deserve the same right as everyone else. So if it’s totally legal, WHY the hell do the four boys in class have to get married multiple times because there are too many girls? And WHAT does that teach them? That polygamy is okay but same-sex marriage is not?

Because what if there’s a kid in her class who grows up to realize she’s gay? Basically she just learned that “q” and “u” go together but girls and girls do not.

And I know what some of you might be thinking. You’re thinking that the school can’t open that can of worms because then they’ll have a shitload of crabbypants parents calling up and bitching because their kid is asking a million questions about same-sex marriage. And here’s what I have to say about that:

3. That would be a good thing.

Because if your kiddo can ask you about same-sex marriage, then if they ever figure out they’re gay, they’re going to feel okay with it. They’re not gonna have low self-esteem because they don’t fit into some mold of what we’re SUPPOSED to be like. And they’re going to feel comfortable telling you who they are and not hide a bunch of shit from you.

Or let’s say they’re straight and they meet someone who’s gay. They’re not gonna think, “Hey, that’s wrong. Girls are supposed to like boys.” I mean why would they think it’s right if all they see is Disney movies where princesses marry princes, and men and women riding off into the sunset together, and the marriage of “q” and “u” where the boys have to marry more than one girl because otherwise girls would have to marry girls.

And just going back to that whole ‘can of worms’ thing. If the school doesn’t want their phone board lighting up with complaints, fine, then don’t perform the marriage of “q” and “u” anymore. Yeah, it’d be a total bummer because I think it’s an awesome idea, but teaching kids it’s okay to be queer (hey, look at that, “q” and “u” are together!) is equally as important as teaching them about letters.

I mean the truth is I don’t think the school intentionally did anything wrong. I just don’t think people are all thinking about this yet.  I LOVVVE Zoey’s teacher, and so far the school has been phenomenal, and maybe this isn’t even what happened. Hopefully not. Because the times they are a changin’ (woo-hooooooo!!!!).

And if anyone from the school is reading this, pleeeeease feel free to call me and tell me Zoey was wrong and plenty of girls did marry girls that day. I promise to write a kickass blog singing the praises of the “q” and “u” wedding and tell everyone that I’m an asshole and that I was wrong. Seriously, nothing would make me happier.

Totally off the subject, but if you’re looking for an awesome present for the holidays, people love Porsches. But if you can’t afford a Porsche, this book might make them happy too! 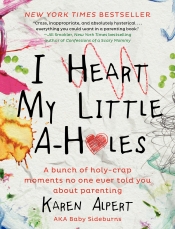 Tags: gay marriage, kindergarten curriculum, same-sex marriage, the marriage of q and u
There are 53 comments for this article
Subscribe to Baby Sideburns
Follow Baby Sideburns on Instagram
Buy my books!!!