(a phone call I just had this afternoon)

NURSE: Hi, is this Mrs. Alpert?

NURSE: You called to see if your kids are up-to-date with their MMR vaccines?

NURSE: It looks like Holden had his first one, but he can’t get the second one until he’s four.

ME: Alright, that’s what I thought.

NURSE: Zoey had her first and oh, and it looks like she’s due for her booster now.

ME: So does she get that at her six-year appointment in May?

NURSE: With what’s going on, I wouldn’t wait. I’d have her come in now for it.

NURSE: Wait, no, I’m wrong. I was looking at the wrong page. She actually got it already. Yup, she got her MMR at her five-year appointment.

Okay, so I’m not sharing this because I want to get everyone all in a panic or anything. And I’m not sharing it to defend what I wrote the other day. Even with all the a-holes writing a-holio comments to me, I still stand behind it 100%.

It’s just that I debated even calling the pediatrician’s office in the first place because I thought they were gonna think I was being a total cuckoo-head hypochondriac mom. I thought she was gonna roll her eyes at me over the phone and poo-poo me and say that my kids are healthy and that I shouldn’t worry about this silly measles shit and that the media is blowing it out of proportion.

In fact, she did the opposite. I mean she didn’t freak out or anything, but before she realized Zoey is all set, she suggested I get her in right away for her MMR booster. Thank God Zoey didn’t actually need it, partly because she’s protected, but mostly because I can’t stand schlepping her to the hot zone of nasty cold-cough-flutopia. I mean this is already like the worst season for germs and right now as I’m typing this, I’m watching her in gymnastics and she literally has her hands in her mouth and I want to bang on the glass and be like, “Nooooooo, get your germy hands out of your mouth before you catch toe-cheese disease!!!” But I digress.

Anyways, here’s my point. The nurse thought it was a good idea to make sure kids are up-to-date with their MMR vaccine in light of what’s going on. They’re not freaking out about it, but they’re taking this shit seriously. And I don’t really know about adults, but it seems like it’s a good idea to call your doctor and make sure you’re up-to-date too, since I think even adults need boosters at some time. Sorry, I’m lazy and don’t have wifi right now so you’ll have to do the research on that one. I know they told me to get it when I was in the hospital after having Zoey.

And MOST OF ALL, please have your hubby check with his doctor to see if he needs a booster because we all know what men are like when they get a cold, so I can’t even imagine what they’d be like if they got the measles.

HUBBY: Honey, I have a red dot on my forehead so I should probably stay in bed all day and watch football and not help get the kids ready and you should give me a bell to ring in case I need anything.

P.S. If you’re not one of the people who hates me right now, you might like to check out my hilarious New York Times Bestselling book. 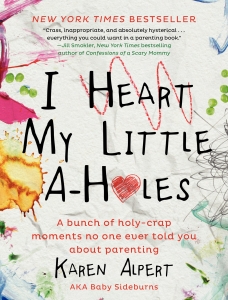 There are 79 comments for this article