Okay, I know when it comes to punishing our kids we’re supposed to give them time-outs or send them to their rooms or make them go to bed without supper and shit like that. But what I’ve learned in my house is that these punishments don’t work anymore. I don’t know if they’re just overused and worn out or whether it’s that my kids are older now.

Like if I give Zoey a time out these days, she basically sits on the doormat by the front door and sings to herself and calls Holden over and then I have to say no to Holden because she’s having a time out right now and then he gets all pissed off and then we’ve got twice the flailing and snotting and yelling. Fun times.

So lately we’ve switched up the punishments in our house a bit.

Like a couple of weeks ago Zoey did something that was not okay at all. Like seriously not okay. I’m not going to go into it here because she will possibly read this one day and disown me and I wish that blogs had a function that made them spontaneously combust the moment your kiddos can read but unfortunately they do not. Anyways, let’s just say it involved pooping. And a bathmat. And holy shit was I mad as a cat with tinfoil on its feet.

ME: Young lady, you knew what you were doing is really wrong. You’re going to bed right now and Daddy and I are going to tell you your punishment in the morning.

THAT is how pissed I was. I couldn’t even come up with a punishment at the moment. I mean usually when my blood is boiling I just yell out the first punishment I can think of.

And then twenty minutes later I’m kicking the shit out of myself because I just desperately need to plop her in front of the TV while I make an important phone call or get some work done or just curl up in the fetal position on the bathroom floor.

Telling her we would dole out her punishment the next morning was basically the equivalent to saying “Don’t do that again or else,” but it sounded a whole lot better. Plus it gave me a little time to cool off because if I doled out her punishment at that moment I might have taken away TV for the rest of her life.

So the hubby and I had hours to talk about her punishment that night (translation: we sat in front of the boob tube and then right before bed we were like awwww shit, we forgot to come up with a punishment and then we figured one out quickly).

Hmmmm, what should we do. Take away her American Girl Doll? Uhhh, yeah, she’ll be so upset if she can’t play with the doll that’s been sitting in the corner collecting dust for the past three weeks. Okay, what if we say no Legos this week? What on earth would she do? Play with the 9,000 other toys she has? Pretty much anything we came up with wouldn’t have had much of an impact. So we thought and thought and thought and finally came up with a good one. Wait, but is that too harsh? Are we being too mean? But we decided no, we needed to come up with something that would have an impact.

ME: Zoey, do you remember what you did last night?

ME: Okay, so your daddy and I decided that for the next week you cannot wear any skirts or dresses.

Shit shit shit, she totally doesn’t care about our punishment. Aggghhh, and now we can’t change it and it’s not going to make a difference. We totally blew it.

(two days after she did something really wrong)

ZOEY: I want to wear that one.

ME: Nope Zoey, you can’t wear that because do you remember what you did the other night?

(the day after that)

ZOEY: Can I just wear one skirt today?

ME: Nope. Next time think before you do something you know you shouldn’t do.

And it was never a big fight. It was just a good discussion point every morning for a week. And just by chance the punishment ended on the day of the daddy-daughter dance and she got to put on a dress again. 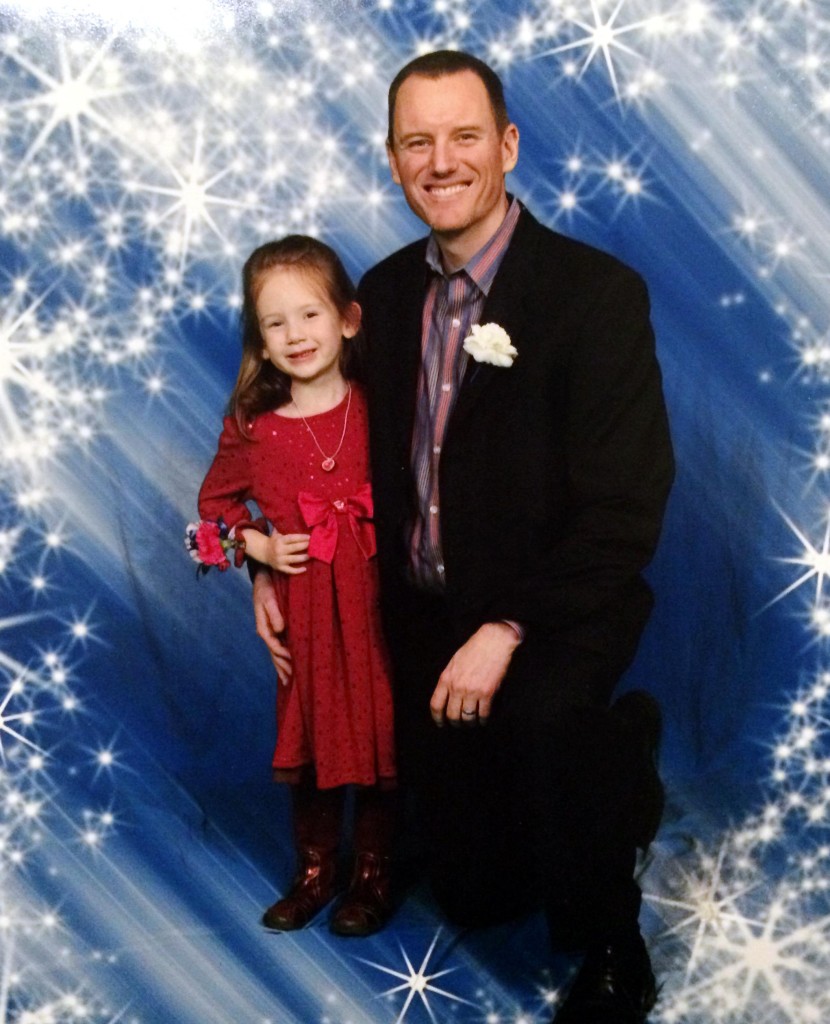 So now when the crotchmuffins act more like crotches than muffins, we try not to react too quickly and get wayyyy more thoughtful about our punishments. Like do you notice anything strange in this picture? 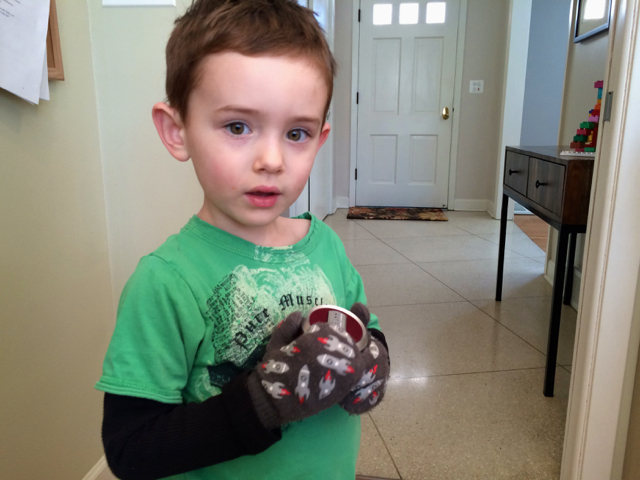 Yup, lately Holden lovvvvves wearing mittens or socks on his hands all day long inside. It’s either some craaaazy phase or he’s got OCD. Kids are so F’ing weird, you never know.

Anyways, whatta we do if he misbehaves?

ME: That’s it, you are not allowed to wear mittens for the rest of the day unless we’re outside.

And that’s when he freaks out but it only lasts for a few minutes and it totally works.

ME: Holden, if you don’t stop banging on those pots right now, I’m totally going to take away your sock mittens!!

And he stops immediately.

Don’t get me wrong. I know this punishment is only going to last as long as this crazy phase does, but there’s always something important I can take away from the kids. Like recently Zoey started a paperclip chain and she calls it her clip collection and it’s stupid as shit but the other day I threatened to take away her clip collection and she was like noooooooooo and acted like it was the worst thing on earth that I could do.

Anyways, the moral of the story is you gotta come up with the right punishments for your own kids. And if you see us out and about and Zoey is wearing a skirt and Holden has socks on his hands then you know that things are kinda sorta okay right now. 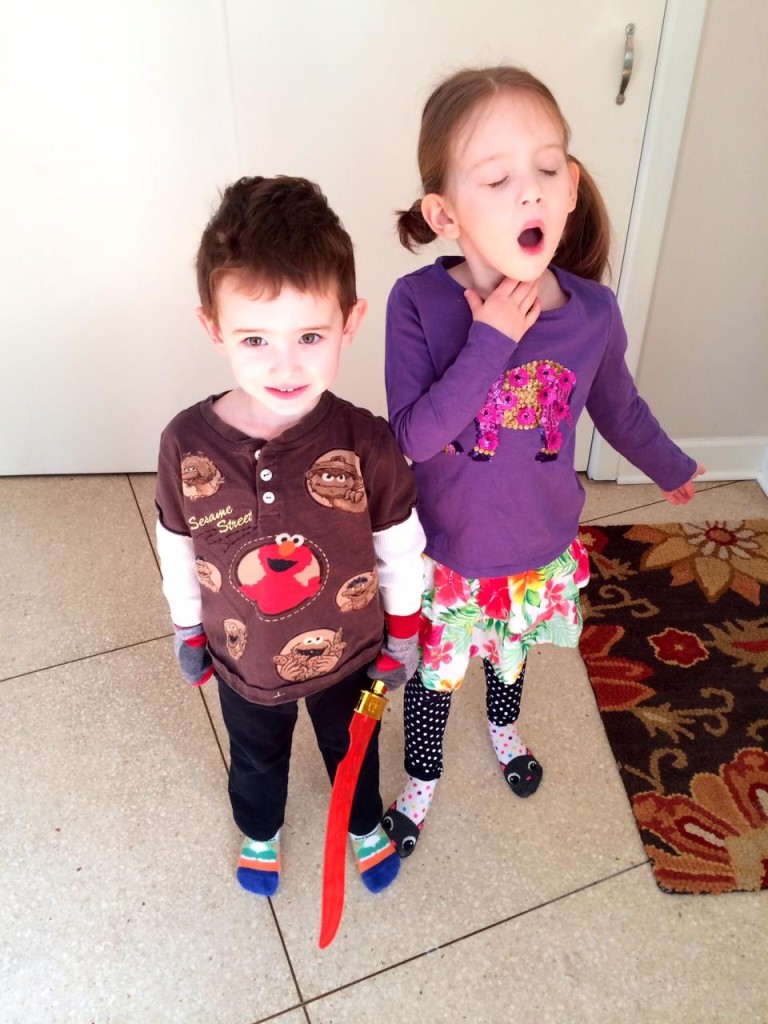 If you like this, please don’t forget to press the “like” button.  And don’t forget to check out my bestselling book that doesn’t sugarcoat the whole parenting thing– I Heart My Little A-Holes. It’s the perfect present for Mother’s Day or a baby shower!! Thank you!!!!


Tags: how to punish your kids, time-outs don't work anymore
There are 32 comments for this article