So last week around Monday or Tuesday, Zoey was getting ready for St. Patrick’s Day. Yes, a whole week in advance (insert eye-roll emjoi here). She had already picked out an all-green outfit and put out a pile of coins and Lucky Charms marshmallows to lure in a leprechaun because she wanted the leprechaun to mess up her room. 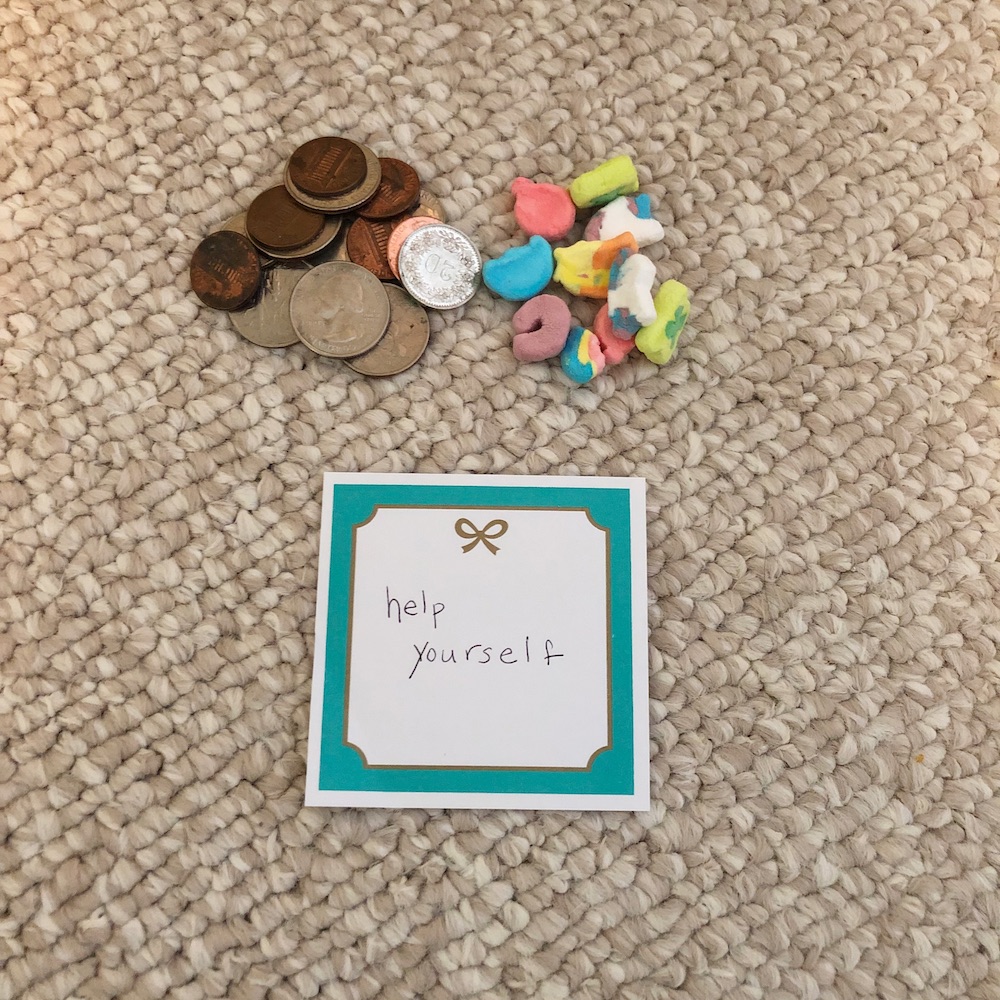 And guess what happened? Nothing. NO-THING. Yup, the pile just sat there all week untouched.

Ummm, I don’t know, Zoey, maybe he had better stuff to do. Cough cough, laundry, packing lunches, making dinners, schlepping everyone around all day. Your little elf is busy, my dear.

Anyways, Saturday night, the night before St. Patrick’s Day, the leprechaun went to a Mexican restaurant and had a margarita and she was feeling a little happier and peppier than usual so she was like oooh, maybe the leprechaun should come tonight!!

So after Zoey went to sleep, I, uhhh, I mean the leprechaun, snuck into her room and went to town on it. I flipped over her chair, threw her laundry and stuffies everywhere and of course took all the gold and ate the marshmallows. Oh, and I left some construction paper shamrocks on top of the mess so she’d know who did it. Side note, have you ever tried cutting out freeform shamrocks while you’re buzzed? Ironically they look like they were cut out by a drunk leprechaun.

Anyways, when I was done with her room, I decided Holden would be all jealous if the leprechaun didn’t do his room too, so I tiptoed in there quietly and messed it up. 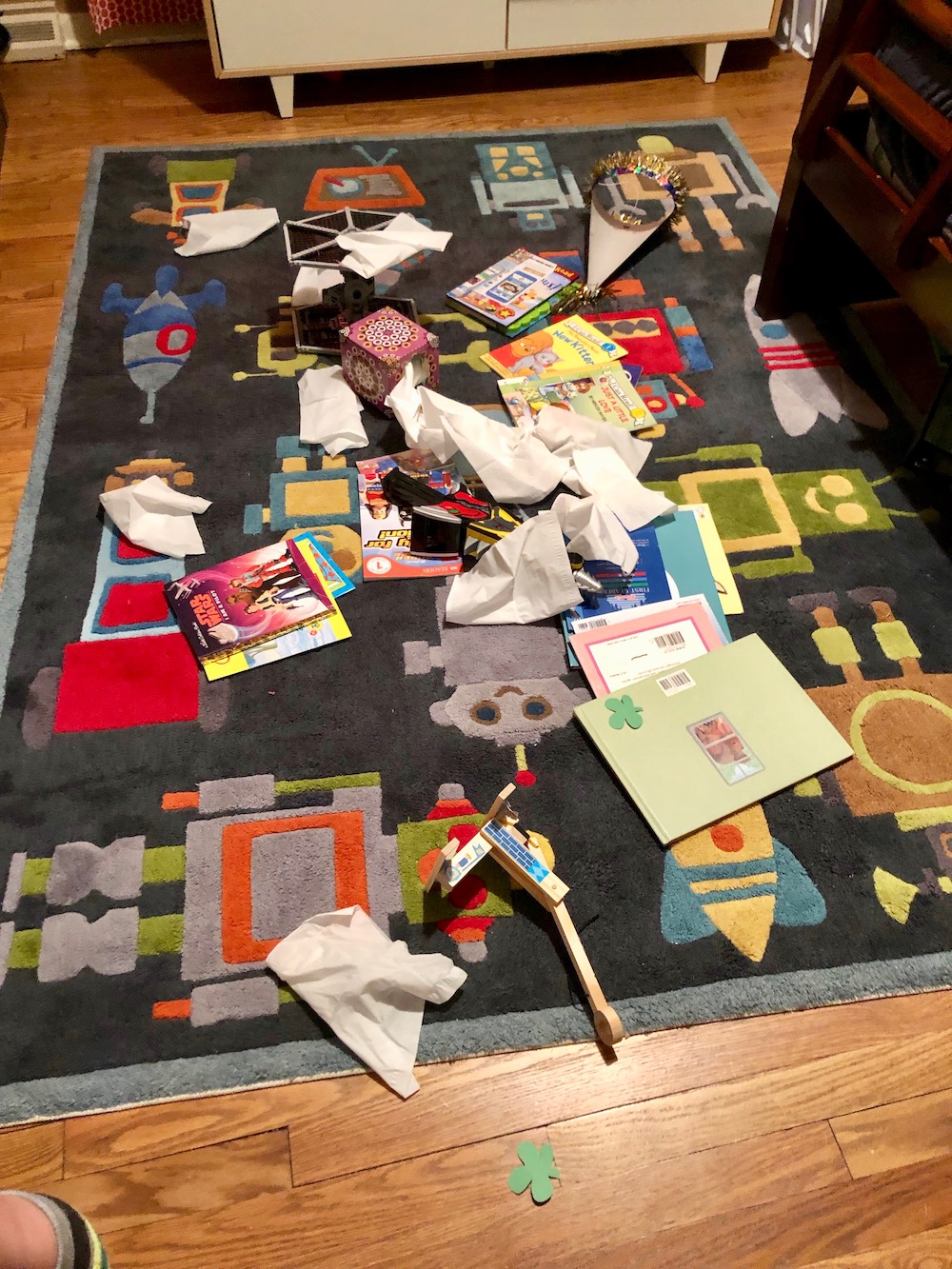 And then I went to bed and had sweet margarita dreams allllll night long. Translation: I tossed and turned and had to pee like a thousand times. Which is why when my door slammed open the next morning, I was not ready to get up.

But it wasn’t an excited voice. He was pissssssed.

HOLDEN: Uggghh, why did the leprechaun mess up MY room? I didn’t leave a trap!

ME: Ummm, I don’t know, maybe he thought you’d be jealous if he only did Zoey’s.

HOLDEN: I would NOT be jealous.

So then we walked down the hall to Zoey’s room. Which was, get this… spotless. SPOT. LESS. Nothing. The laundry was in the hamper. The chair was upright. And the floor was mostly clean. WTF? 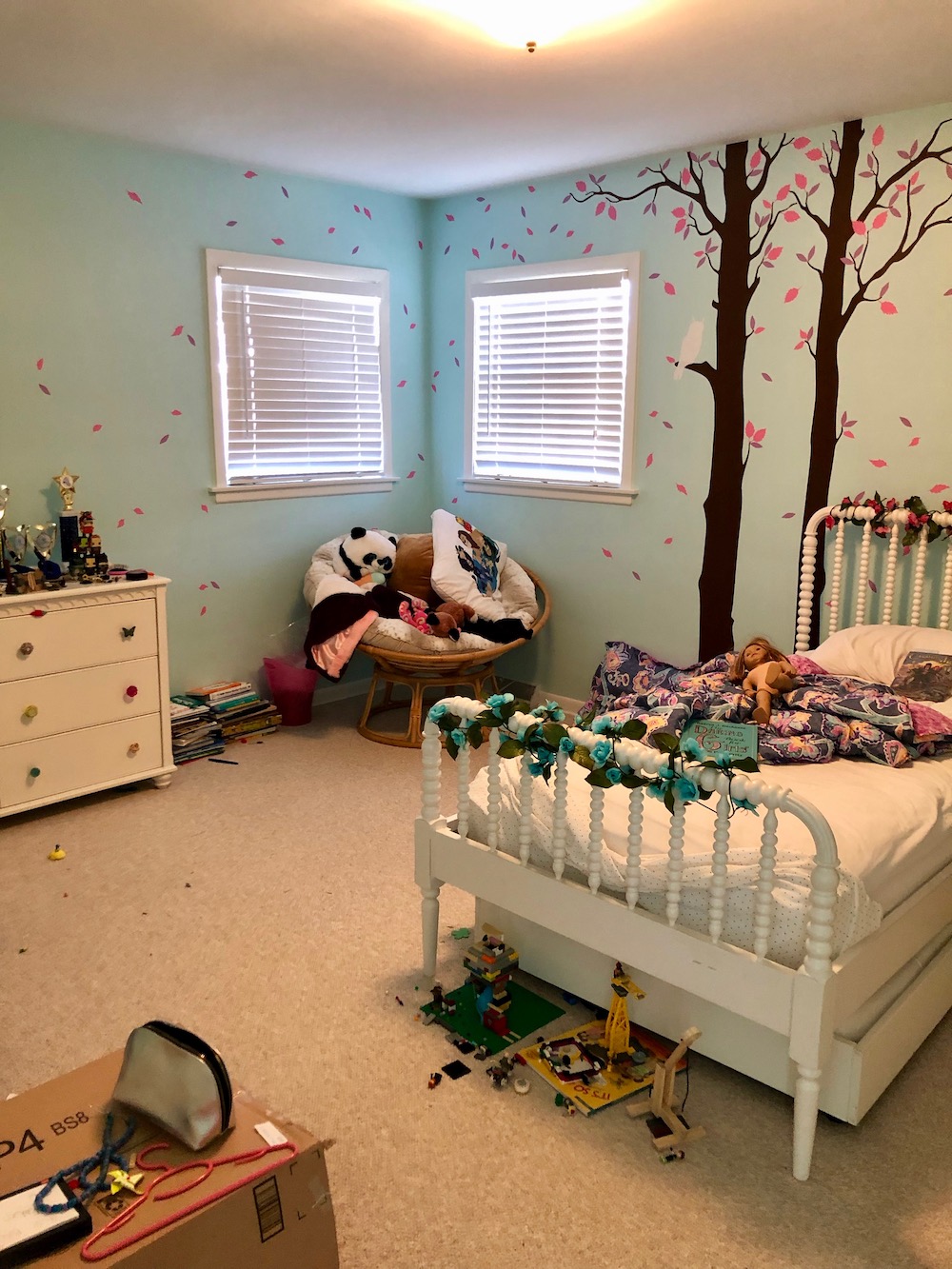 ZOEY: That’s weird, I wonder why he only messed up Holden’s room and didn’t mess up mine at all.

And all morning long she kept walking around saying things like this.

ZOEY: This is so strange.

ZOEY: I feel left out.

ZOEY: Holden, you’re so lucky he came to your room.

And I’m sitting there like, WHAT?!! She totally woke up early that morning and cleaned up the mess, and now she’s walking around LYING about it. But I can’t say anything because I can’t admit that I KNOW it was messed up because I DID IT. Wait, did I mess it up??? YES!! I remember doing it. And it’s not like you remember doing things you didn’t do when you’re drunk. You forget things that you did do.

And then later that day, she took it to a whole new level. Holden ran some errands with me but she wanted to stay at home, and when we got back he went to his room and started calling for me.

And when I got to his room, this is what I saw.

The mess was totally cleaned up and he and Zoey were crouched down looking at this elaborate setup of magnatiles and stuffies.

HOLDEN: Mom, look what the leprechaun did while we were out! He cleaned my room!!

ZOEY: (in the super sweet voice she uses when she talks to little kids) And look buddy, he left you a note.

HOLDEN: (in an annoying baby voice) What does it say?

And that’s when I realize something. Zoey has reached a new stage. She’s not giving up the magic. She just wants to be in on it. It makes me both sad and happy. Sad my little girl is growing up, but happy to have an accomplice.


There are 4 comments for this article