There’s a moment when you’ll be walking around Washington DC or driving in a taxi from the airport and you’ll look around and you’ll be like holy crap. THIS. IS. AMAZING. There’s the Washington Monument! And the White House! And Jefferson’s Memorial! And the Capitol! Like the real live Capitol. 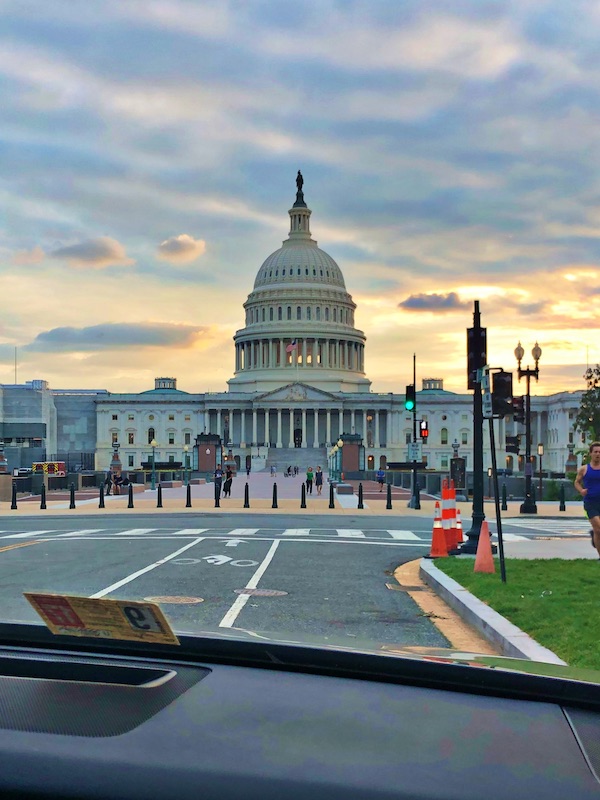 This is literally right outside the car window! I’m surprised you can’t see my jaw on the dashboard.

So much history all in one place.

And suddenly you’ll notice a powerful feeling welling up inside you—patriotism like you’ve never felt before.

When I asked my daughter where she wanted to go on a girls’ trip and she said DC, I was like cool. I didn’t expect this.

It was our first time there but it will NOT be our last because there’s so much we didn’t get to do. But I thought I’d share the itinerary we did do in case you want to get that feeling for yourself. And trust me, you do.

Zoey has always been obsessed with Native-Americans. Her kindergarten teacher did a lesson on them, and since then, she was hooked. So as soon as we checked into our hotel late afternoon, the first place she insisted on going was the National Museum of the American Indian. It did NOT disappoint. 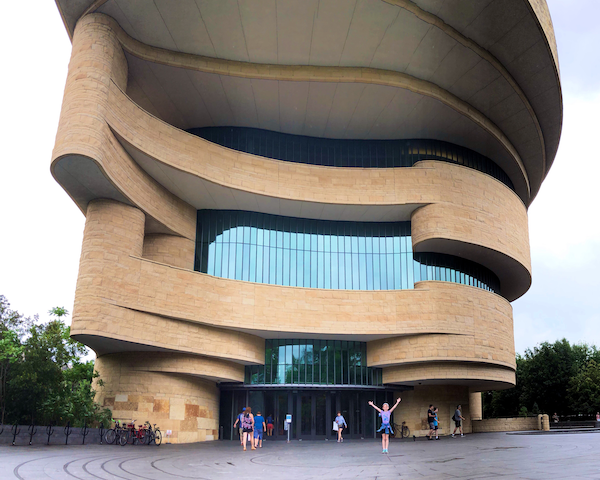 Honestly this would not have been my first choice on the day we arrived, but that’s why DC is awesome. There’s something for everyone. And Zoey LOVED it. She took pictures of everything inside.

Then we headed back to our hotel for a great night sleep. 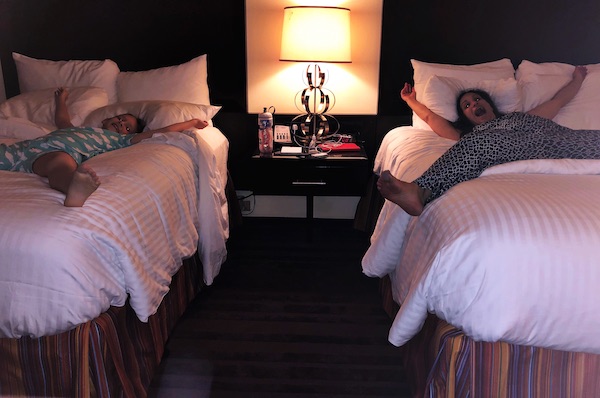 We each got our own bed and got to sleep like starfish!!!

We woke up and went to breakfast at a place called Ted’s Bulletin which was fun and delicious, but I’m slightly devastated because I forgot to order a homemade pop tart while we were there (insert ten sobbing emojis here). 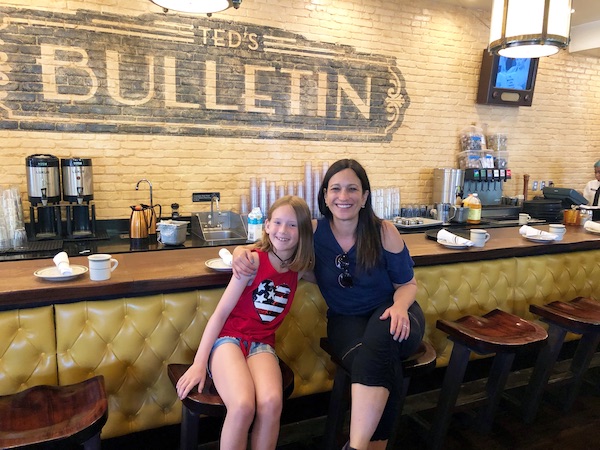 All the TVs play “I Love Lucy” and Zoey was like what’s that show? I felt old.

Okay so I can’t stress this enough. As soon as you know you are going to Washington DC, you MUST MUST MUST email your representative (I made this clickable so it’s super easy!!) because they can get you so many awesome free tours. Like our first tour was, drumroll please, badadadadadadada, the White House!!!!! And seriously, the White House is only open for an hour or two in the mornings for tours so it’s not easy to get in, but it’s worth trying. We got it! And not because I used my powerful Baby Sideburns clout or anything. Bwhahahaha, just kidding, I have no clout. None. Whatsoever. 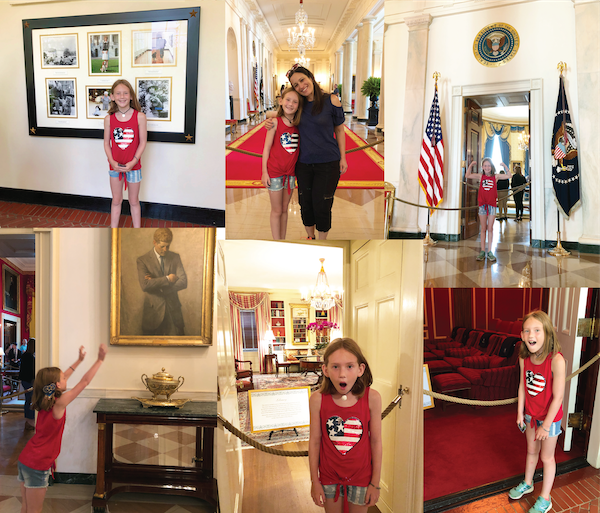 We saw the whole East Wing. The dining room, the Red room, the China room, the library, the theater, soooo much amazing history.

I mean seriously, we probably could have ended our trip right then and there and been happy, but we didn’t! After the White House, we went to the International Spy Museum. FYI, this is NOT a Smithsonian museum so it does cost money (in case you didn’t know, most of the museums in the area are FREE), but it is worth it. 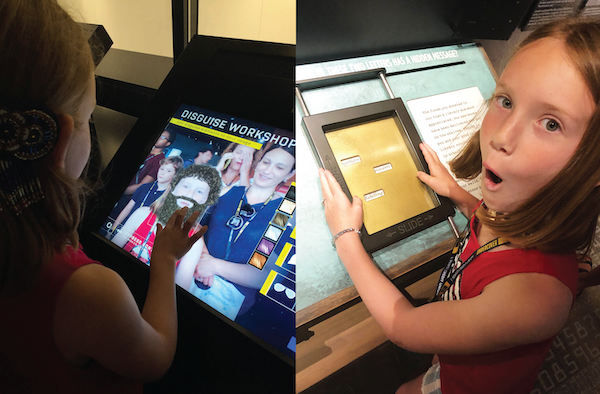 It is PERFECT for kids. You get assigned a spy name with a badge and it has tons of interactive areas that let you pretend you’re a spy. Pick your disguise, decode a hidden message, crawl through a secret tunnel, etc etc etc.

So this is probably the perfect time to mention that your kids can only do so many museums before they’re bored out of their minds. Whoopsie. 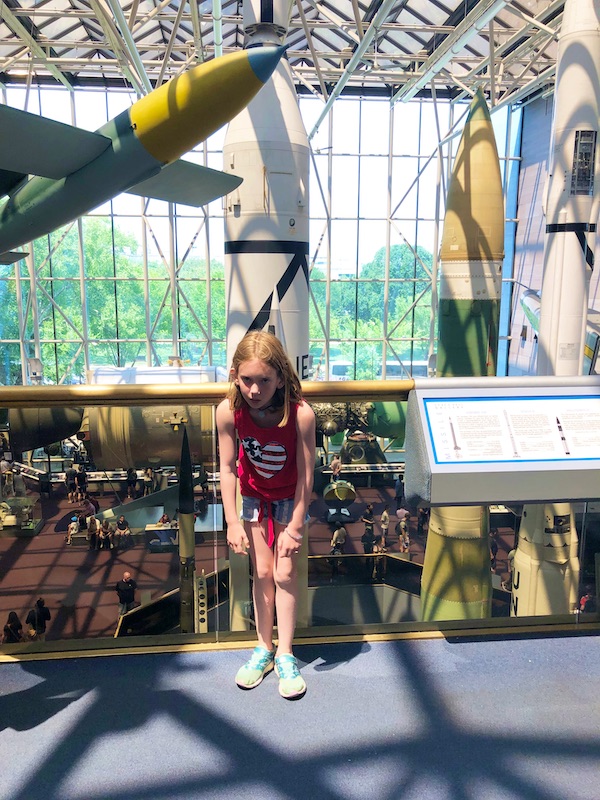 Here is a picture of Zoey bored out of her mind at the Air and Space Museum. This is an awesome museum!! This is a kid who is D-O-N-E.

Oh wait, one more place to see today, Zoey! I would have taken her back to the hotel at this point, but we had one more tour set up through our representative’s office. The BEP!!! Confession, I had no idea what the BEP is. It’s the Bureau of Engraving and Printing and it’s where they make all our country’s money. ONE BILLION DOLLARS A DAY!! 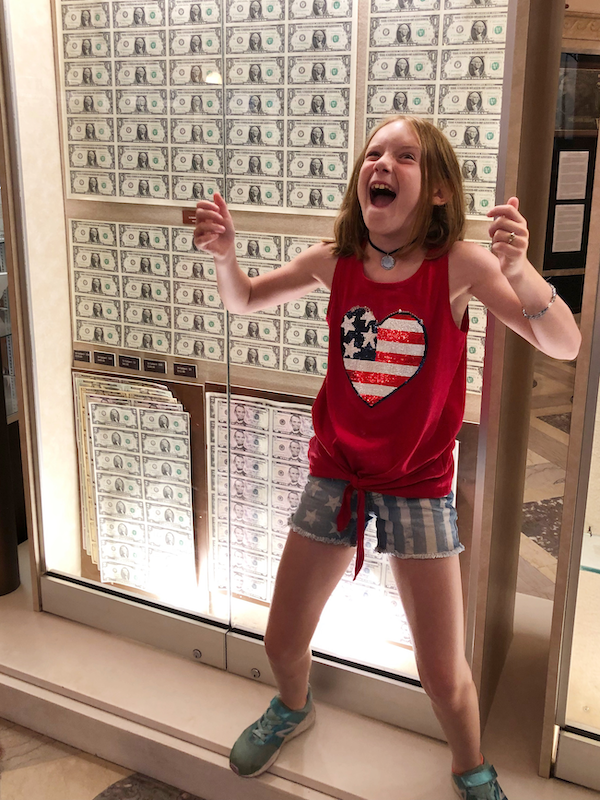 As you can tell, she pepped up at the sight of millions of dollars. We saw the gigantic printers, the sheets of money before they’re cut, etc etc, but we were forbidden from taking pictures, and I didn’t feel like wearing an orange jumpsuit for the rest of my life so this picture from the lobby is all I’ve got.

Yes, that was all one day.

ME: Want to go to another museum?

ME: What do you want to do?

Booking a hotel with a pool was brilliant. It’s DC. It’s hot. 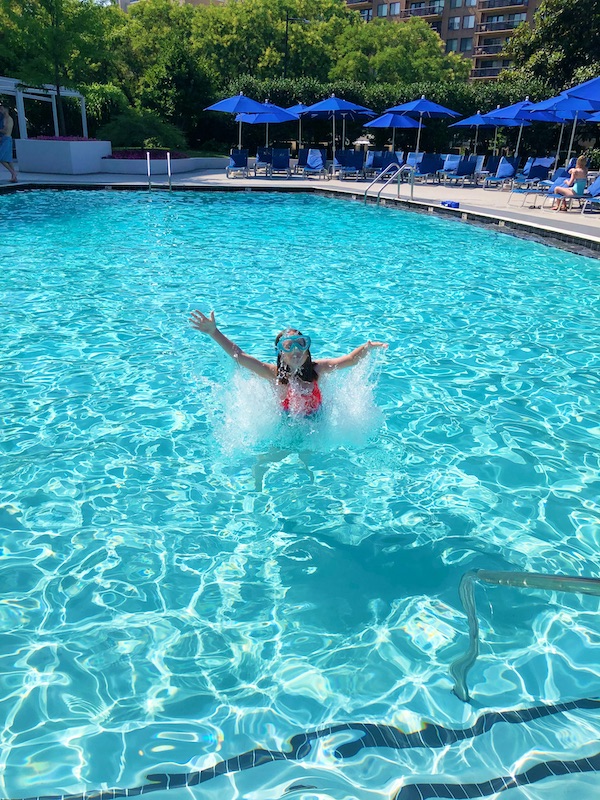 We stayed at the Washington Plaza Hotel. It was not super fancy, but it was comfy, quiet, the staff were sooooo nice, and the pool was wonderful. Also it was pretty close to everything—like a $9 Uber to most things.

It was the perfect way to recharge ourselves before we went on yet ANOTHER tour we got through our representative. The United States Capitol!!!! 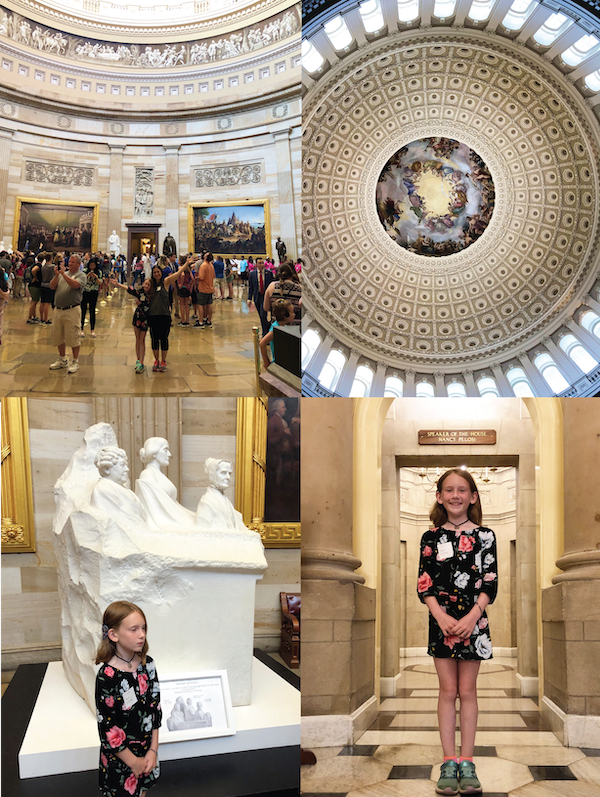 We even got tickets to see the Senate and House Galleries where I made Zoey wait for an hour so we could see the Senate in session. She wasn’t happy about it, but one day she’ll appreciate it. As in later that day when I paid her back by getting her a HUGE ice cream!! Muhahahahaha, bribery. 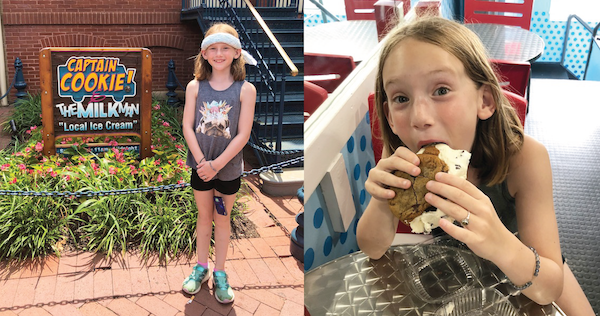 Captain Cookie and the Milkman lets you choose whatever flavor cookie you want on top and on bottom and pick the ice cream in the center. It was HUGE so I might have stolen a little, you know, so she wouldn’t get a belly ache. You’re welcome, Zoey.

Speaking of deeelicious food, we hit three other awesome places while we were in Washington DC. 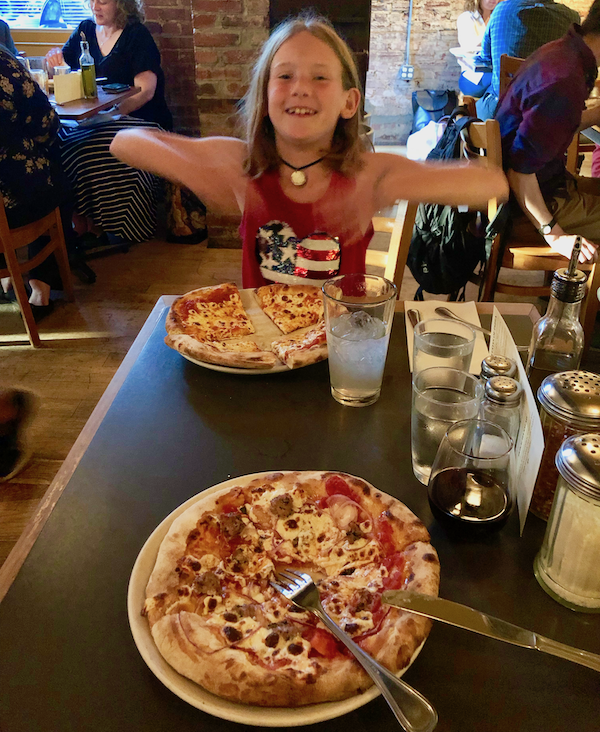 Pizzeria Paradiso in Dupont Circle was AMAZING. The food, the atmosphere, and the outdoor patio would have been amazing if it wasn’t 9000 degrees that day. 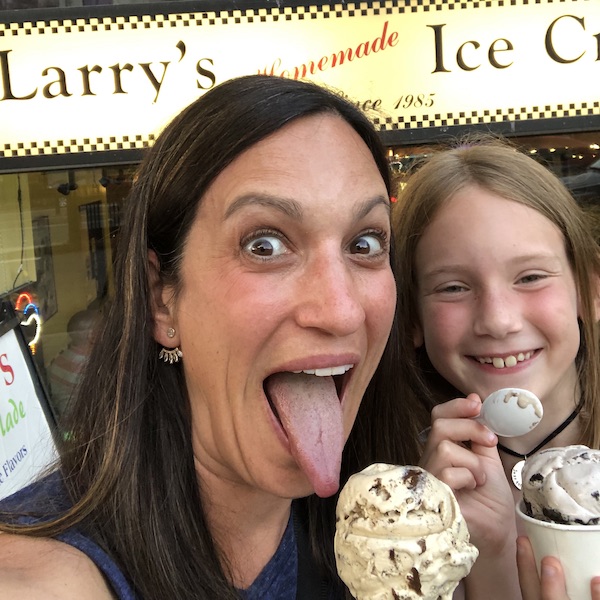 Larry’s Ice Cream is walking distance from Pizzeria Paradiso and it has lots of funky flavors!! And damnnn my tongue is long and frog-like. Sorry.

Pete’s Diner in Capitol Hill was quirky and easy and great. I called to make reservations which seemed hilarious once we walked in and saw it.

Okay, so our Fat Tire Bike tour of the monuments was SUPER FUN, but I made a mistake. I should have booked this at the beginning of our trip. It’s a great way to orient yourself in the city and to see the monuments for the first time.

FYI, this tour is awesome for big kids who have very good biking skills. You do ride in the bike lanes of streets, but our guide was great about making sure Zoey was right behind her and okay. P.S. If your kiddo is younger and smaller, they have a tandem bike that would be awesome.

Last but definitely not least, we had half a day left. I had planned on visiting the Newseum and Astro Doughnuts and Fried Chicken but Zoey wanted to go somewhere else. The United States Holocaust Memorial Museum. After much research and deliberation about whether she’s old enough, I decided to take her. 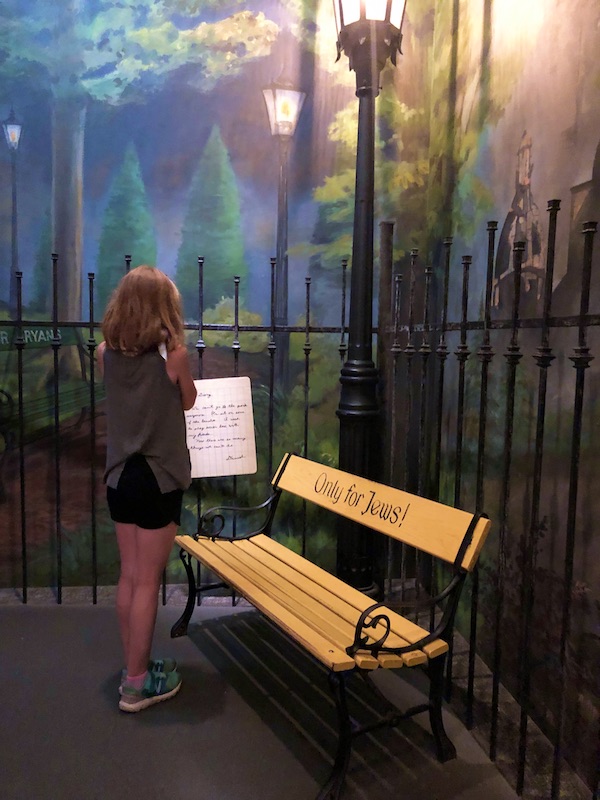 It was shocking and sad and eye-opening, but overall I think it was really good for her.  There is sooo much I can say about this powerful museum, so I wrote an entire post about it here.

And then we ran out of time. Darn it, it’s too bad we didn’t do very much in 4 days. Just kidding!!

I hope this is helpful if you’re taking your kiddos to Washington DC or convincing if you weren’t planning to. Every child in this country should get to see our amazing capital. It’ll make them (and you) so proud to be an American.


Tags: family vacation, travel with kids, Washington DC with children
There are 12 comments for this article