This sucks. Don’t get me wrong, I know social distancing is super important and saving lives and the Sideburns family will stay home and hunker down because we’re taking this very seriously. But still, it sucks. I’m a terrible homeschool mom, I go crazy without some alone time, I’m snacking constantly, and we’re only on day 10. Out of God knows how many.

Anyways, I keep seeing people posting about things to do while you stay home and most of them are like rainbow charts and baking recipes and a bunch of Pinterest projects you have to buy art supplies for, and I’m like duuude, you can make me stay at home, but I’m not going to spontaneously turn into June Cleaver. Plus, who the hell has money for art supplies right now? I spent all mine on food and toilet paper and who knows when our next paycheck is coming. So anyways, I’ve come up with a list of things that REGULAR people can do during the coronapocolypse with shit they probably already have at home. So here goes, TEN things to do so you don’t go insane:

Put together a movie hat

It took us about 15 minutes to come up with a crapload of movies we want to watch. I threw them in a hat, and every day the kids pick one out and we watch whatever it is. No arguing over what to watch!! And if anyone complains I tell them they can go do something else while the family watches the movie together. At which point they always say, “Fiiiiiine, I’ll watch it.” 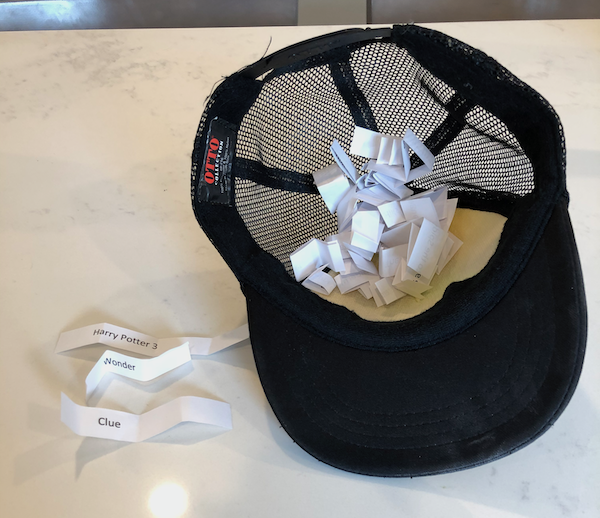 That’s right, I’m going on a bra-cott! If I’m not leaving mi casa, why on earth would I ever put a bra on? I will be freeboobing until I can see people again. Side note, all live videos will be shot from the neck up and if I have black eyes, it’s because I decided to go for a jog.

Host a virtual game of Bingo on Zoom

My friend organized a game of Bingo on Zoom the other day and the kids played for 45 minutes!! It’s pretty simple. Just sign up for a Zoom account and tell your friends to too. You can print out free Bingo cards from a google search (make sure to dig deep in the images so everyone doesn’t have the same card!!), or just draw them with markers. Then one parent calls out numbers and types them in the chat bar and everyone plays. Some people used pennies to mark their cards, some used stamps, and some geniuses (ahem, me) used junior mints. And switched to Goldfish when the junior mints started mysteriously disappearing. 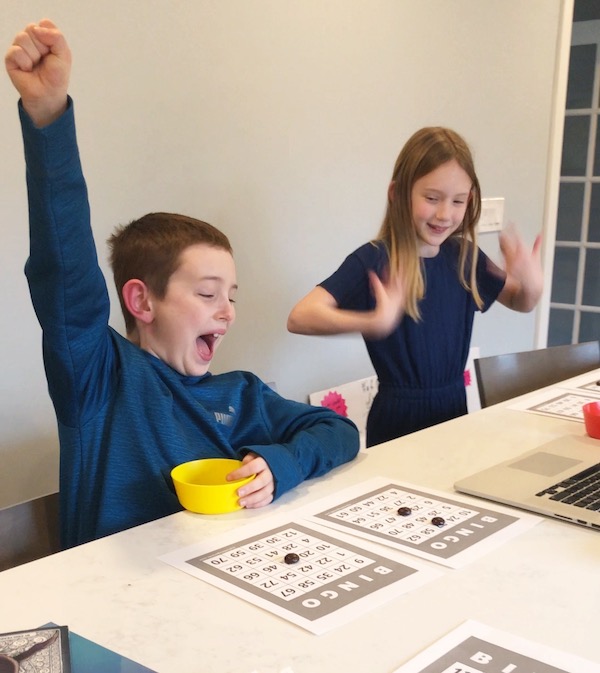 Okay, so back in BC (before coronavirus) we used to go to Lego Life Meetings. The awesome LEGO dudes would give each kid a mini kit to build. After the kids were done building the mini kit, they would use their imaginations to free-build something else to go along with it. Like if the mini build was a rocket ship, kids might build a docking station or planets or aliens taking over the rocket. And then they all present their creations to the group. Anyways, guess what I just ordered off Amazon? FOUR mini builds!! (P.S. I am an Amazon Affiliate so if you click on these pictures, I might make a little moola) 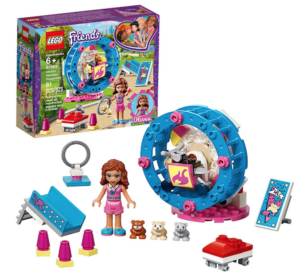 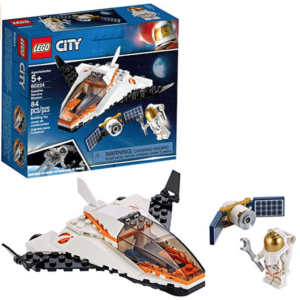 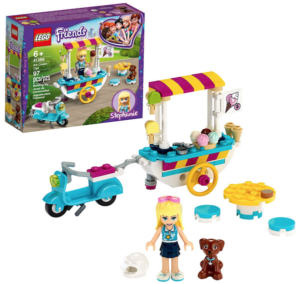 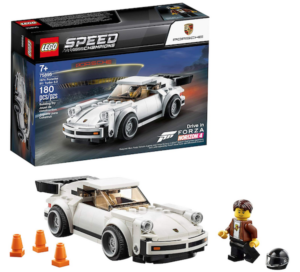 Our first LEGO Life meeting will take place on whatever day the Amazon box arrives and I pick it up by the tips of my fingers to avoid the plague that apparently survives on cardboard. Awesome.

Put your Christmas lights back out 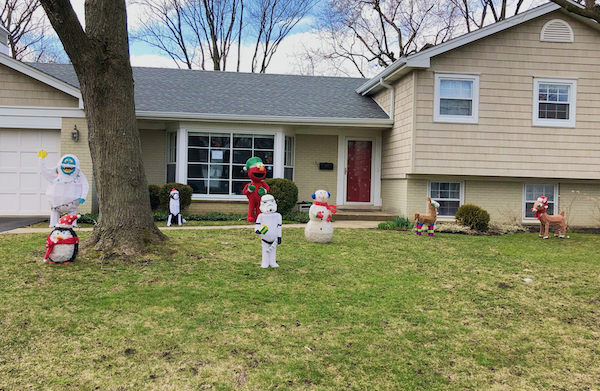 Mine are practicing social distancing just to be safe!!

Go for a walk and talk with a friend

So the other day my friend was like do you want to schedule a walk and talk? And I’m like “YES!!! (pause) Wait, what’s that?” Yup, I’m that desperate friend who’ll do pretty much ANYTHING if you ask me. “Want to go get enemas together?” “Sure do!!” Anyways, you basically go walking at the same time as your friend and you call each other and chat while you’re walking. It’s almost as awesome as actually walking together (total lie). But it IS hilarious when you realize you’re hearing their real voice not through your headset and you’re like WTF and then you look up and see it’s because you’re on the same street and you get to wave to each other. 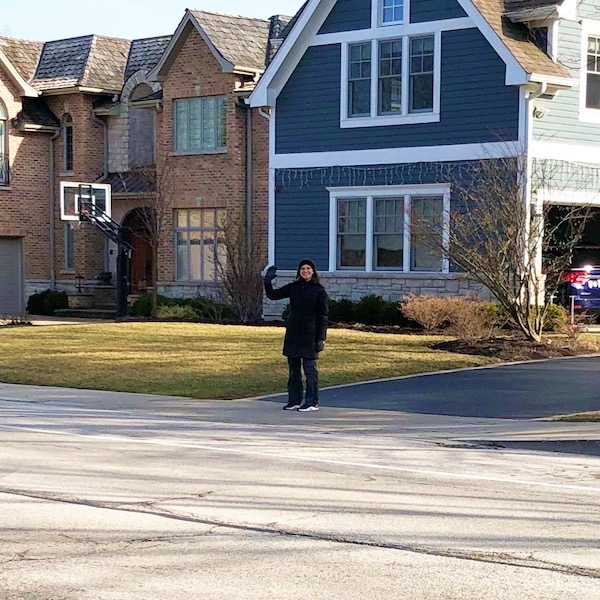 Want to do something fun for art class today?! This is one of our favorites. Alls you need is paper, a pen and a blindfold. Everyone covers their eyes and one person gets to yell out something for everyone to draw blindfolded.

The world being attacked by a mutant virus!! 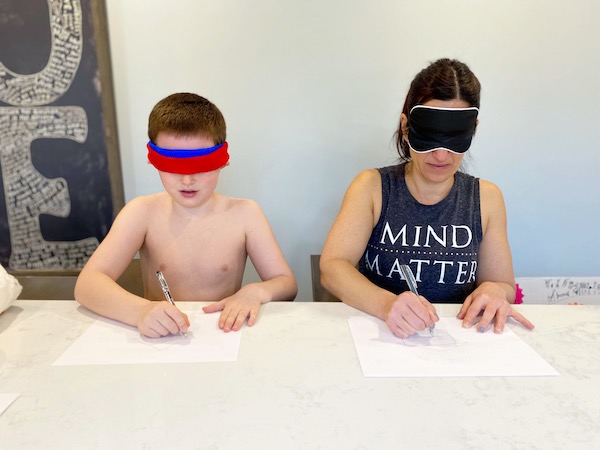 I don’t know about you but we have a shitload of LEGOs around here. But instead of just telling your kid to go play with LEGOs, give them a challenge. “Hey, [instead of driving me up an F’ing wall], I challenge you to build a LEGO arcade!!”

Zoey and Holden are high-fiving in front of an air hockey table, and if you look to the right, you can see me playing Skee-Ball!!!

Or a pirate ship!!

Or the set that has been sitting unfinished in your room for the past year.

Her Great Grandma Shirley bought her this last year before she passed away. I hope she’s looking down and smiling at this.

So when I was in college and we had final exams coming up and the pressure was crushing us, someone would schedule a primal scream. Basically it was a flash mob before flash mobs were invented. At 10PM, every person in the college would literally stop whatever they were doing and just scream. It was loud, it was deafening, but it was THERAPEUTIC. So if you feel like screaming, step outside and do it. Just for 20 seconds or so. And when you’re done, just make sure to shout, “I’m okay, don’t call the cops!”

Anyways, there you go. Now the time will just fly while you sit at home for the next three months. Not. But these ideas + wine + craploads of screentime should help. Now excuse me while I go sit at the bottom of my closet under a pile of dirty clothes with a flashlight and a book where no one will find me.

If you liked this, please don’t forget to like and share it! Thank you!! And stay safe!!!!


Tags: coronavirus, Covid 19, stay home
There are 4 comments for this article