Zoey is eleven. I’m saying that right out of the gate so people know. And please don’t send me a bunch of nasty hate comments because your kiddo’s younger than that and they have TikTok and it’s absolutely fine. If your kiddo has it and it’s working for you, by all means, keep going. I’m not the decider of all deciders. This is just what happened in our family. So anyways, here’s what happened.

About six months ago, we gave Zoey one of our old iPhones. Awwww shit, here come the nasty hate comments about how she’s too young to get a phone. It’s all relative people. The kids in her grade have been getting them for a long time, and we got to the point where she was feeling left out, so we took the plunge.

Mostly she just used it for these humungous text groups of kids saying crap like, “Let’s make the longest text message ever and set a record!” and then they’d just keep writing “hi” over and over and over again until it was pages long. And then some kid would say a bad word and Zoey would say it’s a bad group and she would leave. And then someone would add her back. And then she would leave again. It was annoying but manageable.

Then one day she came running in and said, “Mom! Can I get TikTok?!” Now I’m in social media so you’d think I’d be all savvy about TikTok, but don’t forget I’m 47 and totally lame so it was kinda new to me.

Why I let her have TikTok anyway

Here’s the thing. Zoey LOVES making videos. Like she’s been doing it for years and does all these cool stop-motion ones and even did one with potatoes wearing googly eyes once and it was hilarious. 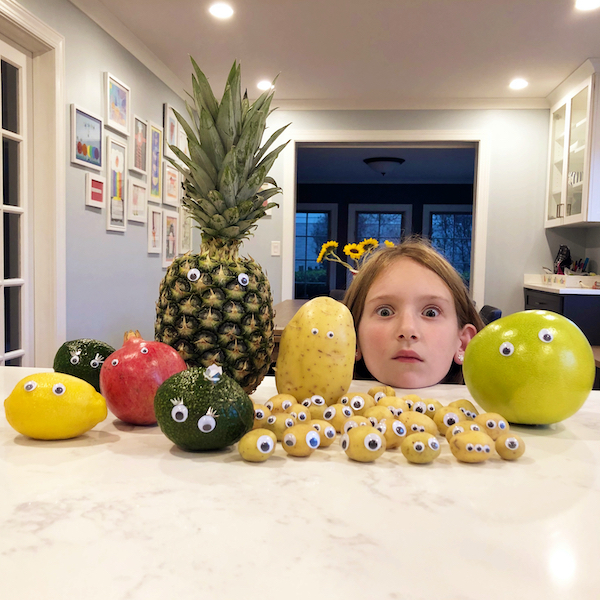 I thought TikTok would be an awesome way for her to make more videos, and I’ll just make sure to set her account to private and use the kid settings to protect her. Ennnh, bullshit.

I did everything I could to make sure her account was safe. Private account, didn’t use her real name, I had to approve of each follower, set it to the child settings, yada yada yada, and after she and I talked about some rules, she started making videos. Oh man did she make videos. Tons!! Some of them were soooo creative and cool, and some of them were dumb as a rock. But that wasn’t the problem.

This was the problem

She started surfing the many videos other people made. And at first it was awesome and she got lots of ideas about new videos she wanted to make. But then one night we put her to bed and she kept popping up like a Whac-A-Mole and I was like aggghh, go the F to sleep!!! And that’s when she told us. “I can’t. I saw something scary on TikTok and I can’t get it out of my head.”

It was a VERY scary video. It started out all normal. A girl was mad at her parents and yelled, “I wish you were dead!” And the next morning she woke up and there was a creepy man in her house, and he whispered, “Careful what you wish for,” and then she saw both her parents stabbed to death with knives.

Ummmm, this would scare the crap out of me and I’m 47. But we told Zoey she needs to understand that it’s totally fake and they’re just trying to scare little kids and that she needs to think of happy thoughts and erase stupid videos like this from her head.

She did it!! She got over it and finally went to bed that night.

But a week or two later the Whac-A-Mole returned at bedtime.

This time she saw a video about a girl who looked in the mirror and her reflection turned into a scary demon.

So again we told her to stop surfing TikTok and to try to remember it’s fake.

And a week later…

A video about an older couple that found blood seeping from the walls in their house.

I told her to try to forget about it. I told her none of it is real. And last but not least, I told her I’m sorry, I’m taking TikTok away. It wasn’t a threat or a warning. It was just what was going to happen. After our conversation, I marched straight to her phone and removed TikTok.

I was prepared for her to freak out, but so far she hasn’t said a word. Phew. But we’ll see. I won’t be surprised if within a week she’s yelling at me and saying it’s not fair!! Although I’m pretty sure she won’t yell, “I wish you were dead.” Heyyy, maybe TikTok did teach her something.

Mistakes can be fixed

As parents, we sometimes cave and let our kids have shit that’s not great for them. A huge box of candy before noon. An entire day of television. A sundae even though they didn’t eat their veggies. And it’s totally fine because it’s not really gonna hurt them. But sometimes we make a mistake and give them something that really can be harmful. Maybe it’s something like TikTok. Maybe it’s a movie we shouldn’t have turned on and we realize in the first five minutes. Maybe it’s letting them ride without their car seat before they’re big enough.

And I know there are plenty of people out there who think you can’t take stuff away once you’ve given it to them. No takesie backsies! But I don’t think so. If something might hurt your kid, you can always take it back. It’s okay to say, “I’m sorry, Mommy made a mistake.” I made a mistake by giving Zoey TikTok. And I’m owning up to it.

If you liked this, please don’t forget to like and share it. And feel free to be honest in the comments as long as you’re nice. Thank you!


There are 26 comments for this article