I’m just gonna come right out and say it. I am a Disney person. No matter how messed up your life is, for at least the first few minutes when you’re walking down Main Street in Magic Kingdom you can’t help but be optimistic. I mean I’m not gonna lie about how it’s going to be 100% unicorny rainbows the whole time you’re there. Because kids are like ridiculous experts when it comes to throwing tantrums and being whiny, especially when you’ve spent gazillions of dollars to have a good time. But I am gonna give you a few pointers on how to make your trip a little more magical 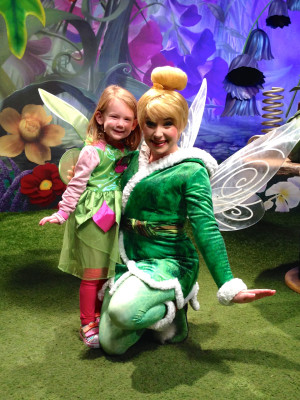 and a little less sucky. 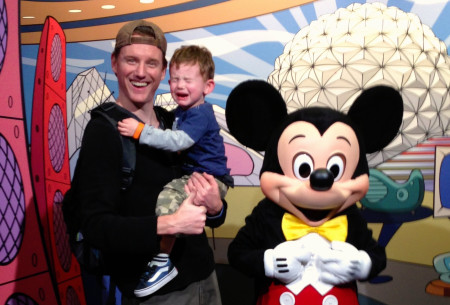 1. If your kids are little and you’re debating whether to pull them out of school or go during a holiday break, here’s a question. Do you like standing in line? If your answer is yes, then absolutely you should go during a holiday break and pay to stand on line allllll day long? What’s that? But you’re scared if you pull your kid out of school for two days that he might miss Mrs. Crabapple’s lesson and he’ll never learn that 2+2=4. He can always come back and learn math, but you only have a few years to teach your kid how awesome you are before they become teenagers and realize the truth.

2. Speaking of gazillions of dollars, wanna know an awesome way to pay for your vacation? Start a swear jar. The Sh word= a nickel, the F word= a dime, and before you know it, the jar has enough money to send the family to Disney. And you can feel extra awesome because you totally earned it. 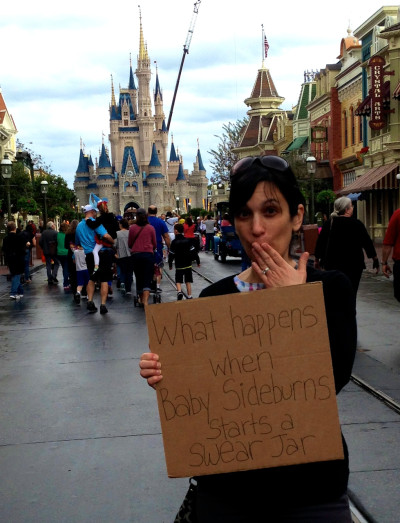 3. Once upon a time there was a really stoopid mom who accidentally took her daughter on a scary ride at Disney World and her daughter shat a brick and wouldn’t go on any other rides for the rest of the day so basically they paid $300 to sit on a bench and eat churros. Yup, that was me. So the next time we went to Disney I got a brain transplant first so I’d be smarter, and before our trip I took my kids somewhere else first. YouTube. Yup, there’s this brilliant company on YouTube called Theme Park Review who takes all these awesome POV videos of rides so you can let your kids check them out ahead of time and tell you which ones they want to go on and which ones will scare them to death. At first I was like, awwww, but that takes some of the magic out of it. And then I remembered our experience on the Teacups ride and I realized noooooo, THAT took the magic out of Disney. 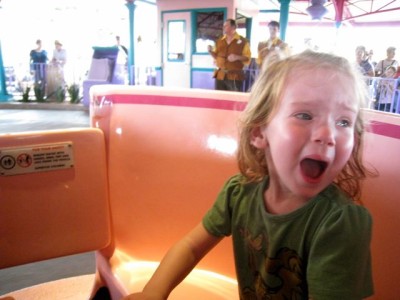 4. So in the real world, a stack of three pancakes costs what? Like $7? Okay, now instead of stacking them, pour them on a griddle in Orlando and forget to space them out enough so they run together and look like Mickey Mouse, and suddenly they become like $30. So here’s what I do. I pack a couple of boxes of granola bars in my luggage and we eat breakfast for free every morning. Plus, we don’t have to waste time on breakfast so I can set the alarm for the crack of dawn and not the ass crack of dawn.

5. And speaking of food, I have to go get some. Wait, no, that wasn’t what I was going to say. Shoot, are there chocolate stains on this post now? But I digress. But at least it’s a chocolate digression, right? Anyways, speaking of food, we also brought along our own lunches every day. Yeah, you totally feel like you’re doing something illegal when they check your bag on the way into the park, but seriously, they’re looking for bombs and guns. “Stand back everyone, she has a peanut butter and jelly sandwich and it’s going to blow,” said no bag-checker ever.

6. And if you think I’m just too cheap to spend money at Disney, you’re wrong. Because believe it or not, I am going to recommend that as long as you don’t have to take money out of your kid’s 529 plan, stay in a Disney resort. ‘Cuz here’s the thing. If everything goes right on your trip, it doesn’t matter where the heck you stay. But if there are any glitches, a Disney resort can fix stuff like no one else. Don’t get me wrong, I love a nice Ramada Inn at the end of the day, but when our luggage gets lost and our Disney Magic Bands were in it, free Folgers doesn’t do jack.

7. While you are in Orlando go to the T-Rex Restaurant in Downtown Disney and order the yummy cotton candy martini drink. After you drink it, your teeth will feel like they are wearing a luxurious fur coat and it will be awwwwwwesome. And you won’t even notice that your kids are scared and screaming their heads off when the dinosaurs come to life every fifteen minutes. 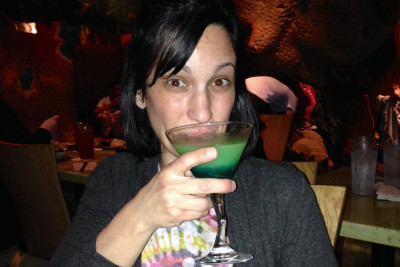 8. Okay, if you are a fly-by-the-seat-of-your-pants kinda gal, put on some different pants because when you go to Disney, you can start booking stuff 180 days in advance. I kid you not. I am not exaggerating like I often do. I don’t know where the heck I’m having breakfast THIS Saturday, but I can tell you that in five months on January 16 I will be eating a very overpriced breakfast with Cinderella and all of her princess friends at 9:32 AM. AND you can book rides like 60 days out (IF you are staying in a Disney Resort Hotel, 30 if you are not). So I will also know that on January 16 at 10:32 AM I’ll be barfing my pancakes up on Thunder Mountain Railroad. Who wants to sit in front of Mommy? Barrrrffffff. That’s karma for waking me up too early this morning. 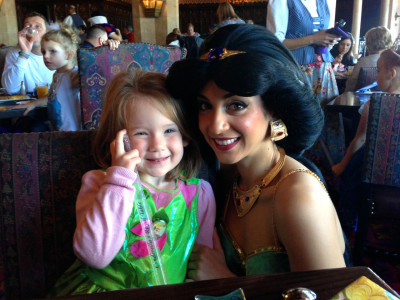 9. To push a stroller or not to push a stroller, that is the question. Don’t worry, if you decide not to bring a stroller to the park and you realize you made a BIG stupid mistake, you can always rent one at Disney. For a LOT of money. $27-$31 a day for a double stroller. Which is hysterical because double umbrella strollers cost like $60 to BUY and KEEP forevvvver. And yeah, you could just rent a single. But that’s basically like telling your kids that one of them doesn’t get to ride the awesome umbrella stroller ride. And here’s the thing, Disney is a HUGE place. I mean no, you can’t use your stroller when you’re standing in It’s A Long Line for It’s A Small World, but you can use it when you’re at Epcot and you desperately need a beer in Germany on the other side of the park, or when the monorail drops you off two-hundred yards from the gate and thousands of families are stampeding each other to get into the park before anyone else. So yes, bring your stroller. Just don’t plan to leave anything valuable in it because it will sit in a parking lot for strollers half the day. I kid you not, there are special stroller parking lots.

10. Remember how earlier I talked about how I got a brain transplant. Here’s something really dumb I used to say before I had it. “I refuse to change diapers at Disney. I am not taking my kids there until they are both potty-trained.” And then one day a light bulb went off in my head and I was like, duhhh, diapers are AWESOME. Because when you’ve been standing in line for 42 minutes and you’re almost at the front and your kid says I have to tinkle, the correct answer is not, “Okay, can you hold it for 17 more minutes?” The correct answer is, “Great, go in your diaper and marinate because a little urine won’t kill you and we can change it when the ride is over.” Seriously, my whole family of four wore diapers so we never had to stop to pee all day long. Not really, but I wish.

11. Okie dokie, I’m already past #10 and my bladder is the size of a lima bean so I have to go, but here are a few last minute thoughts. Pack a princess dress so you don’t have to pay 9 million dollars for a new one because your daughter is broken-hearted when she sees all the other kiddos wearing them. Bring wipes because even if you don’t eat sticky stuff, you will most likely sit in sticky stuff. Carry hand sanitizer because I have a theory that every single inch of Disney has at one time been touched by throw-up. Bring your patience because when kids hit their highest highs on the rides, they also hit their lowest lows on the pavement. If your kids are getting hungry, go to lunch EARLY and not at noon when the whole entire park goes and the line to get hamburgers is as long as the line to meet Anna and Elsa. Don’t blow your whole load on a nice hotel room that you will never be in except for when you’re sleeping or sitting in the bathroom trying to watch movies on mute because your kiddos are sleeping. Call Disney or a Disney travel agent to make reservations and don’t just book stuff on Disney.com without help because that’s what I did and I didn’t realize real live people can actually help you get better deals and talking to real live people is actual kinda nice. And don’t forget about the cotton candy martini. Seriously, that was the most important tip on this whole list. 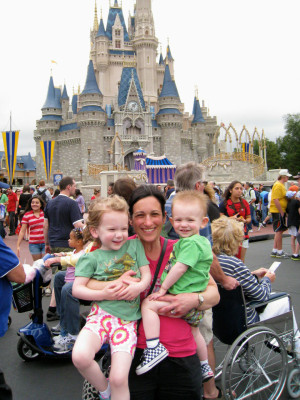 If you have any awesome Disney tips, feel free to put them in the comments section. And if you think this page is kinda sorta funnyish, don’t forget to subscribe!