Awww shit, there it is, the sound of Holden’s feet getting out of bed and coming down the hallway. Yeah yeah yeah, I know that the pitter-patter of little feet is supposed to be all adorable and shit, but I’ll tell you when it’s NOT adorable. When it’s three in the mother F’ing morning!!! AGGGHHHH, GO BACK TO BEDDDD!!!!

And to make it even worse my hubby is sleeping through it right now and I know since I’m awake I should be the one to bring Holden back to his room, but this totally isn’t fair because I brought him back to bed two hours ago and it’s not my turn again. So screw that.

ME: Honey, he’s up again. Can you put him back to bed?

HOLDEN: Nooooo, I need someone to take me back.

Oh, are you F’ing kidding me? I am not going to sit here listening to a fight between the two of them in the middle of the night.

And I do. But W….T….F? I mean this kid is well over three-years-old and he’s still waking us up every night. Wait, no, that’s a lie. He’ll sleep through the night for like a week and just when you think he’s finally a normal sleeper, he starts getting up again. GRRRRRRRRR. And if you think it’s because we didn’t sleep train him, I have three words for you. You. Are. WRONG. We sleep-train the shit out of him like every two months when he starts doing it again. And believe me, we know how to sleep train.

In fact, our first kiddo sleeps like a narcoleptic who was shot with animal tranquilizers. And we did the same exact sleep-training for both of them. I am 200% convinced some kids are born to be awesome sleepers and some are born to suck balls.

And to make it even worse, when he wakes up in the middle of the night, he’s like totally delirious and in a daze so I’m not even sure he knows what he’s doing. But I don’t give a crap. It’s time to pull out the big guns.

(after gallons of coffee the next morning)

ME: I think we should try some positive reinforcement.

HUBBY: How about some negative reinforcement?

HUBBY: Like if he doesn’t stay in bed, he doesn’t get TV the next day.

I mean I remember when Zoey was little and she went through a super brief phase when she was getting up too early and we told her if she would only get TV the next day if she stayed in bed until at least 6:30AM, and then she would forget and wake up at 6:00 and lose TV and she would be a crabby tired mess all day and so would I and I couldn’t even plop her in front of the boob tube and it SUCKED ASSSSSS.

ME: How about we try some positive reinforcement first and if that doesn’t work, then we can try something negative?

ME: Maybe we can duct tape him to his bed. (big ole pause) I’m kidding.

CPS: You can’t duct tape your kid to their bed at night.

ME: I know, that’s why I said I was just kidding.

CPS: You shouldn’t even say it.

ME: Can I at least fantasize about it?

ME: Holy crap, if you know what went through my head sometimes.

But I digress. Anyways, since taking away TV or adding duct tape are great plan B’s, we decided to go with plan A – a very cliché sticker chart. Actually I’m the one who decided to go with a sticker chart and I told my husband that’s what we’re doing and then I made it and he didn’t have a choice really because I put so much work into it. See? I even drew a smiley moon on it. 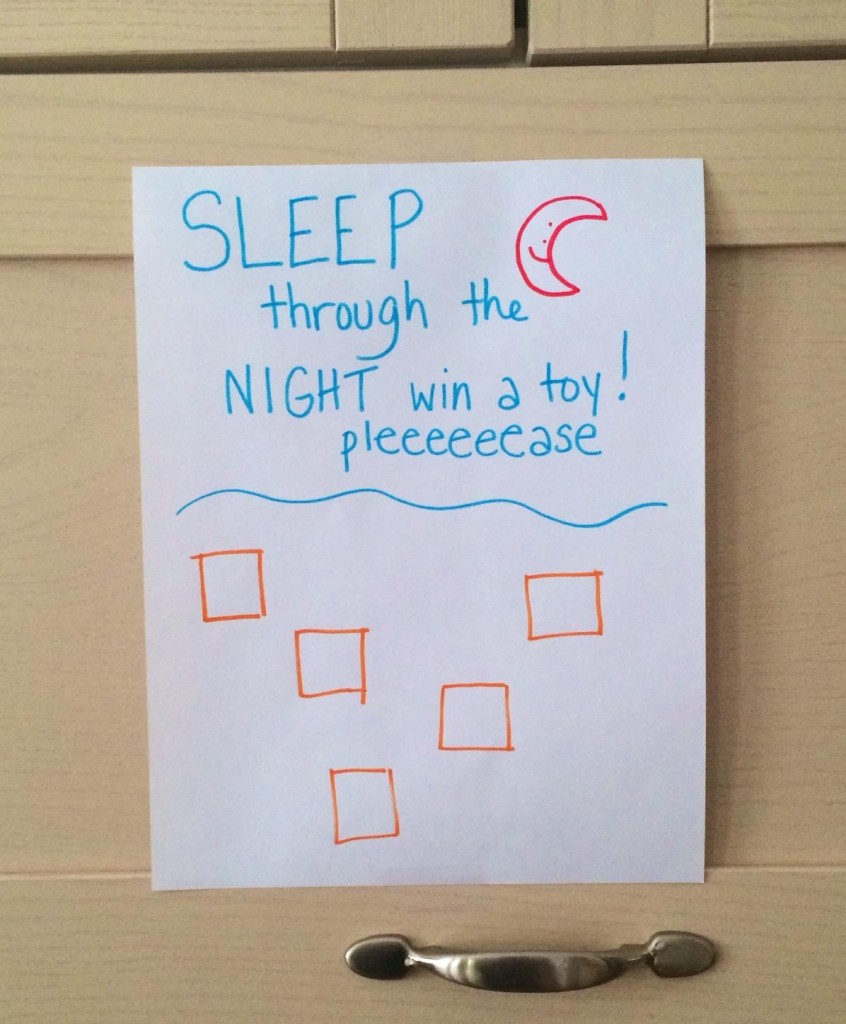 And then I took Holden to Toys R Us to pick out a badass amazing awesome toy he really reallllllly wants (under $25 because the grandparents weren’t buying it), and now this big ole Paw Patrol toy is propped up in the middle of our dining room table (which is a more of a random shit collection table since we never actually eat there). 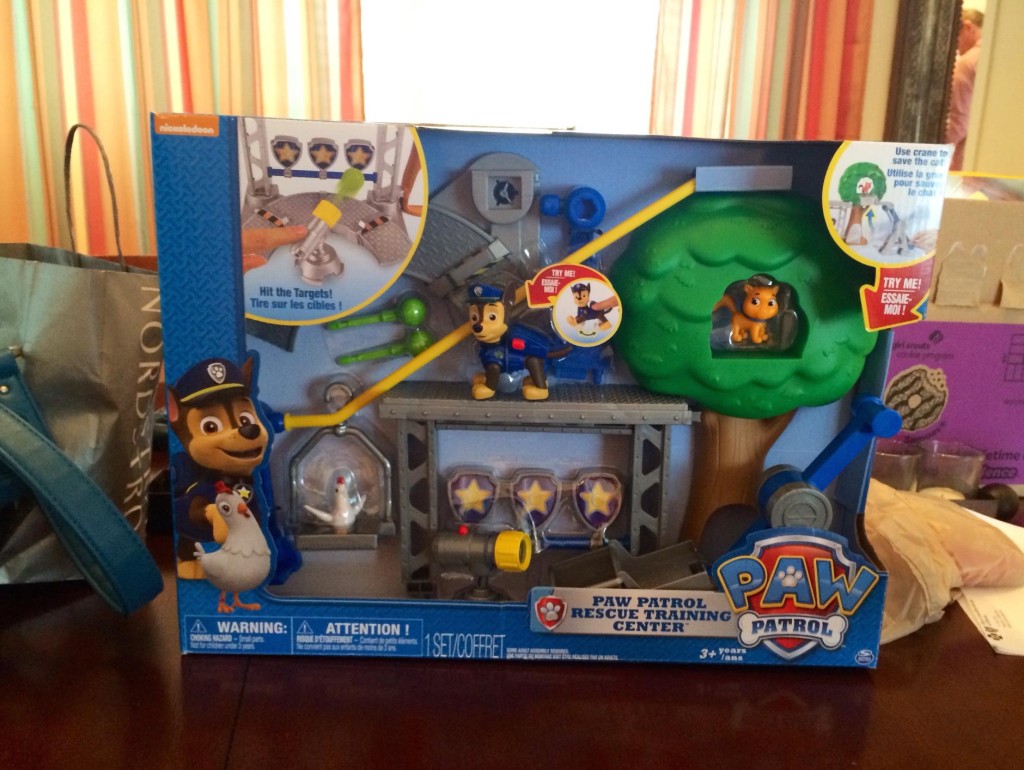 When he earns five stickers on his sticker chart, he gets it. Yup, all he has to do is sleep through the night five times and they don’t even have to be consecutive.

Want to know what happened? I’ll tell you.

That little crotchmuffin has slept through the night two nights in a row right off the bat. Yeah, Mr. Delirious at 3AM actually isn’t delirious at all. He’s faking it. Move over Eddie Redmayne ‘cause guess who just stole the best actor trophy from you. My little rugrat. Yup, ever since I gave him the sticker chart and the awesome toy incentive, that little douchenugget hasn’t gotten out of bed once.

And here’s what I predict. I predict he’s going to sleep through the night for the next three nights and then on the sixth night AFTER he’s earned his prize, he’ll wake up at about one hour after I fall asleep and he’ll be up because he wants to play with his new Paw Patrol toy.

ME: No, buddy, it’s after midnight.

But that’s just a prediction and maybe, just mayyyybe, I’ll be wrong and my sticker chart will totally work and he’ll keep sleeping through the night for the rest of his childhood until he heads off to college and I’ll remember what it’s like to get seven straight hours of sleep again. Bwhahahahahahhahahhaha!!! No, I’m not stupid enough to think this is REALLY going to happen. But hey, it’s worth a try. At least before we break out the duct tape. Or do something really crazy… like unplug the TV.

If you like this, please don’t forget to “like” it!! Thank you! And don’t forget to subscribe to this page so you’re not relying on douchebaggy facebook to show you my stuff. Just kidding, I love you facebook. Except when you don’t show people my shit.


Tags: sleep-training a toddler, sticker chart, toddler wakes up at night
There are 63 comments for this article