I cheated. Yup. When I heard if we wanted to get on the new Rise of the Resistance Star Wars ride that we would have to get to Hollywood Studios 90-120 minutes before the park even opens, I was like screw that. But then there was this little voice in the back of my head, “What if it’s worth it?” So I cheated. I went on YouTube and I watched the ENTIRE ride to see.

Did you know you can do this for pretty much any ride? I do it all the time. To see how scary a ride is. To see if Holden’s gonna get motion sickness. To see if it’s worth waking up at the ass-crack of dawn to get to the park before the sun is even up. And as soon as I watched the Rise of the Resistance video, do you know what went through my head? Oh crap. It’s worth it.

So yup, we got to the park SUPER early and yup, we got to ride the Rise of the Resistance. And when I posted about it, I had a million people asking me, “Do you REALLY need to get there THAT early?” Here’s my answer in a word: maybe.

So if you’re a Star Wars nutjob like me, or if someone in your family is, or if you’re just headed to Hollywood Studios and thinking maybe we should try, I’ve come up with a list of VERY HELPFUL tips to help you get on it. So here goes:

1. What time should you get to Hollywood Studios?

The park was opening at 8am so we got there at 6:30. Could we have arrived at 7? Maybe. But I was like why risk it for a stupid 30 minutes? We woke up at 6, grabbed granola bars, and I ordered a Lyft car. So yes, we got to the park NINETY minutes early. I know this sounds insane. It is. As we pulled up and it was still dark outside I was wondering whether we might be the first people there. Bwhahahahahahahahahahahahaha. 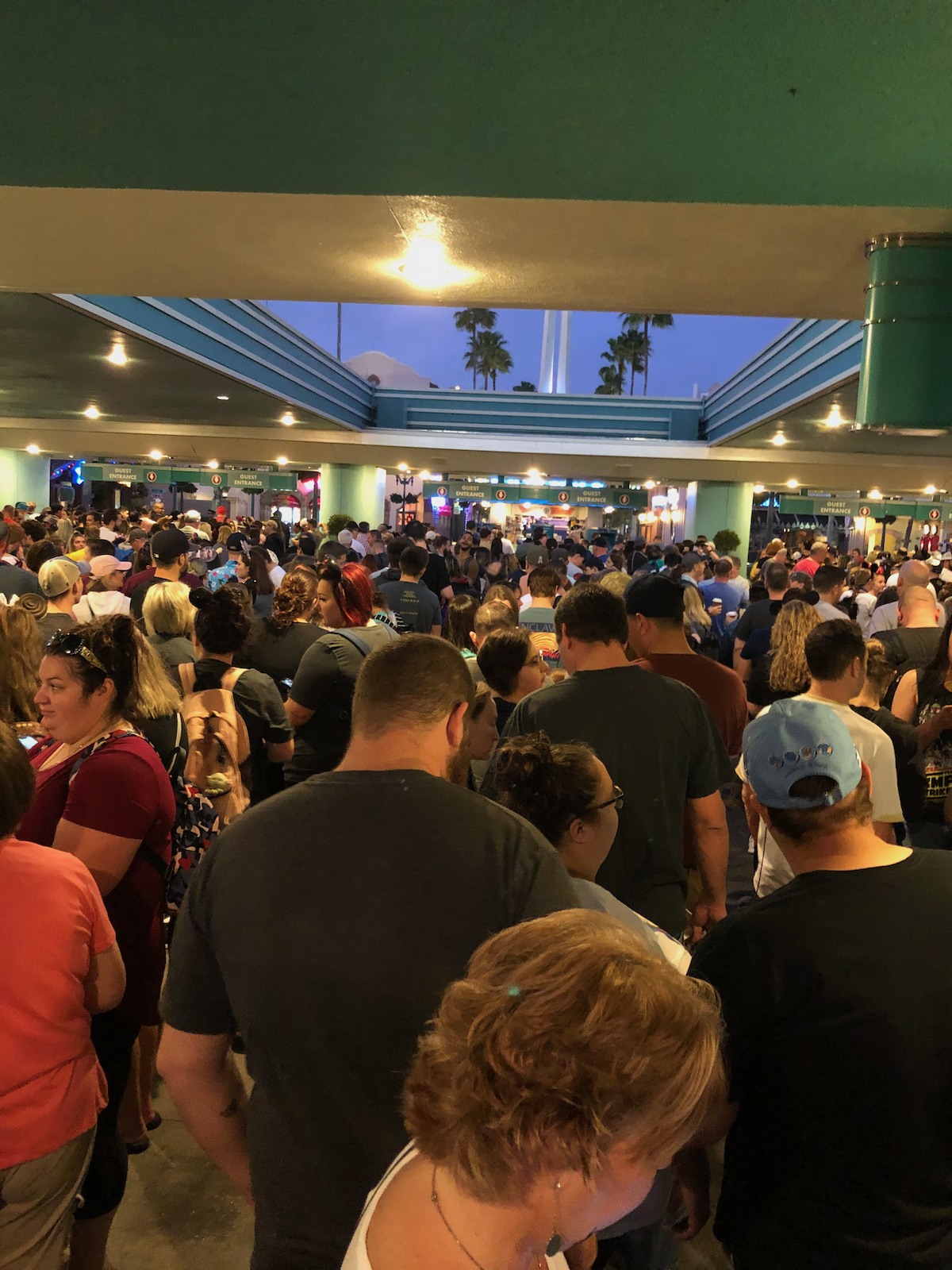 A few people got there before us.

But if we had waited until 7… 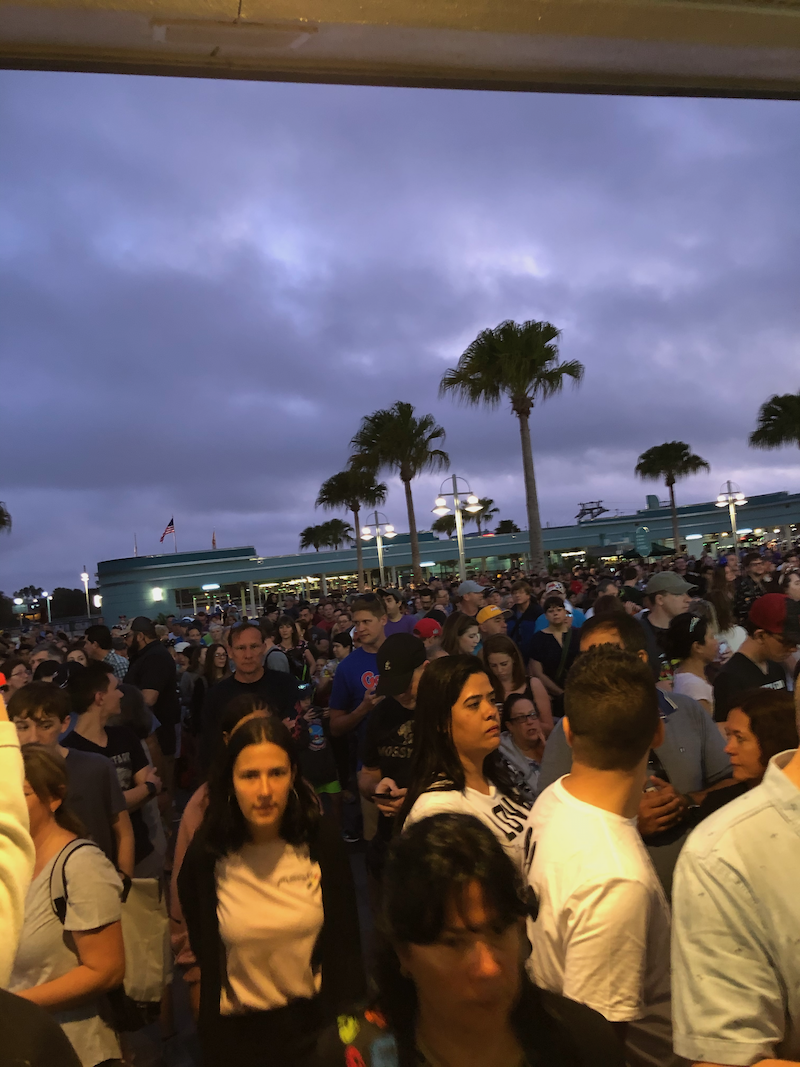 I turned around and took this picture about 15 minutes after we arrived.

2. FYI, the ride is NOT first come first serve

No, why would it be that easy? Grrrr. Basically Disney opens the gates to people before the park even opens. Like you literally scan your magic band and enter the park even though everything is still closed. Then you WAIT. Everyone who is INSIDE the park by 8am can try to get on the ride. But if you haven’t gotten through the gates by 8am, You CANNOT try until your magic band is scanned and you’re inside Hollywood Studios. And EVERYONE in your party who wants to ride the ride must be present to sign up. Sorry, Dad CANNOT go stand in line while Little Timmy sleeps in.

You know how I said nothing is open? I lied. Starbucks is open and so is a stand that sells Mickey pretzels because duhhhh, you can always spend money at Disney. But there are two WAY MORE important things you should be doing instead:

Option 1: Go sign your kiddo up for Jedi Training

Seriously, this IS first come first serve so get your butt over there quickly. It’s free!! It’s awesome!! And just seeing a bunch of fierce little girls dressed up as Rey wielding light sabers like total badasses makes it worth it. Take advantage of this since you’re at the park early. 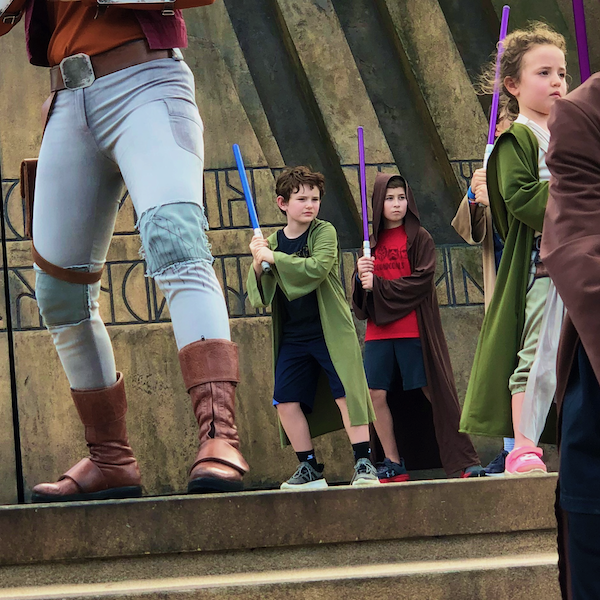 Option 2: Get closer to the first ride you want to ride

Walk towards the entrance of Toy Story Land or Star Wars Galaxy depending on what ride you’re dying to do first that day. After signing up for Jedi Training, we raced to the entrance for Toy Story Land to get closer to the Slinky Dog roller coaster. They won’t let you in yet, but the line for the ride starts forming already. 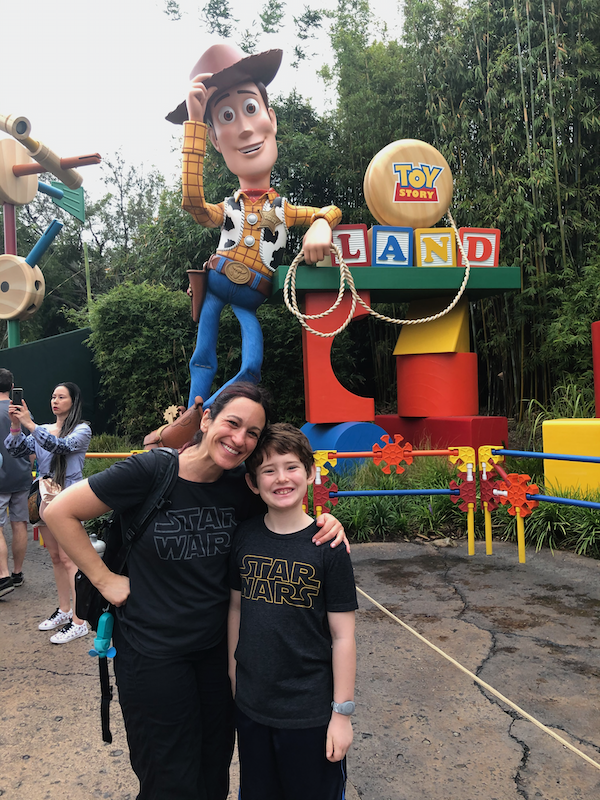 4. Prepare your phone to sign up for Rise of the Resistance before the park opens!!

Make sure you are NOT on Disney WiFi. Thousands of people get on their phones at the exact same time. Do not compete with them for WiFi. As long as your cell plan is working, that’s what you want to use.

You need to be logged into the My Disney Experience app!! Make sure to do this the night before (if not earlier!) so you don’t hit any problems.

P.S. If you have more than one person with a phone

I didn’t do this because it was just me and Holden, but someone told me that if you have multiple phone users in your party, that you should all be on your phones all logged into the same account all trying at the same time. Don’t know, don’t care. Just kidding, I do care! If you know, put it in the comments please!!

At exactly 8am (and I mean EXACTLY) every single person in the park who has scanned their magic band is eligible to jump on the My Disney Experience app and try to get a boarding group for the Rise of the Resistance ride. It is literally a finger race so go go go. For 10-20 seconds it is dead silent as everyone is trying. It’s weird. Here is what you will need to do:

On your homepage of the My Disney Experience app, click “Find out More”

It’s going to take you to the following screen. Do NOT click “join boarding group.” From what people told me, that’s not actually clickable. Click “My Status”

Then it’s going to prompt you to choose everyone in your party who wants to ride the Rise of the Resistance, so be ready to pick them quickly. I wish I had a screenshot of this but there ain’t no way I was stopping to take a screenshot at that moment.

And then you wait. Hopefully not long. For me it was probably a second or two.

6. What you’ll see if it works

Wooohooooo!!! People in our area started shouting out their group numbers and high-fiving each other. Feel free to join in! I literally had goosebumps.

7. What to do if you get an error message

Thank God I didn’t or I might have had a heart attack, but someone told me if you see an error message to take a screenshot of it immediately BEFORE you do anything else. They said that if you show a cast member, they will get you on the ride. I don’t know if this is true, but it’s worth a try. Oh, and after you take a screenshot, I’d recommend trying for a boarding group again.

8. Is my boarding group a good one?

It depends on how many groups they get to that day. I kid you not. It’s not a well-oiled spaceship. If the ride runs smoothly all day, they’ll get into the 100s. If the ride breaks multiple times the day you go (it broke at least twice on our day) they don’t get in as many boarding groups. I heard people on my page saying you don’t have to get to the park that early because even if you’re group 120, you’ll get on. That’s not necessarily true. It depends on how the ride runs that day. Our day it definitely did NOT.

9. How do you know what time your boarding group will be called?

You don’t. Turn your notifications on and your phone will alert you when it’s your turn to board. Then you’ll have two hours to get to the ride. Personally I recommend going ASAP because the ride does break sometimes. And besides, you’re about to go on the RISE OF THE RESISTANCE so get your booty over there!!!!

10. How to process your emotions

Bwhahahaha. But seriously, this is a stressful process. If you get on, have the time of your life! If you don’t get on, oh well. Will you be sad for the rest of your life? I hope not. It’s a ride, people. It’s not the end of the world… thanks to the resistance!!

If you liked this, please don’t forget to like and share it!! And if you’ve been on the Rise of the Resistance ride and have any tips or want to share about your experience, put it in the comments below or on my Facebook post!! Thank you!!!!